Slash
Quelaag's Furysword is a curved sword in Dark Souls.

A curved sword born from the soul of Quelaag, daughter of the Witch of Izalith, who was transformed into a chaos demon. Like Quelaag's body, the sword features shells, spikes, and a coating of chaos fire. Power affected by wielder's humanity.

Quelaag's Furysword is created by modifying any Standard +10 curved sword or curved greatsword with the Soul of Quelaag. This can only be achieved at the Giant Blacksmith in Anor Londo.

Quelaag's Furysword suffers greatly reduced attack damage from opponents with high defense. Since its attack is divided into two different damage categories, resistance to its damage blocks is twofold.

Being a Chaos weapon, Quelaag's Furysword's damage output scales with Humanity. The scaling increases up to 10 humanity. 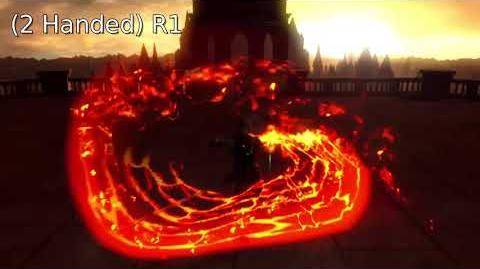