Pus of Man are enemies in Dark Souls III.

Exploding from the bodies of unfortunate undead, this consuming chaos corruption manifests itself as an amorphous black blob, vaguely resembling some horrific beast in silhouette, but with no recognizable shape.[1]

Pus of Man are hollows that have been corrupted by the Abyss. Upon detecting the player, they are consumed by a mass of black tentacles and transform into horrific abominations. They gain a massive claw like appendage and a new red-eyed serpentine head (something that resembles both Manus and the Primordial Serpents) grows from their back, the infected hollow’s body is visible among the corruption. The Pus of Man in the Consumed King's Garden are already transformed when the player encounters them.

Whilst the majority of Pus of Man are infected Hollows, there are exceptions. Iudex Gundyr will transform halfway through the boss fight and the twin wyverns in Lothric Castle will transform once they have been slain. The version inside the wyverns is unable to move and can spit poison from a distance that causes curse.

Note: This section relies heavily on speculation. Very few facts are offered in game to substantiate most of the information here.

The Pus of Man vaguely resemble serpents with twisting ivory horns protruding from their body at random intervals. Serpents are considered imperfect dragons[2] and were at some point a symbol of the Undead. The dragon correlation would explain the presence of the horns, and the connection to the Undead might give a clue to the corruption's origins. The soul of Manus was a "viscous, lukewarm lump of gentle humanity".[3] When Manus' humanity went wild, he became a raving beast and began to emanate the Dark, giving birth to the Abyss. It's possible that the Pus of Man are humanities similarly gone wild.

Pus of Man are very vulnerable to Fire damage, which will cause them to writhe in agony for a few moments, giving the player time to attack or escape. Close ranged combat is risky but they have difficulty turning, so attacking them from behind is a good way to inflict damage, although they will attempt to re-position themselves if given the chance. Their destructive rampages often damage and outright kill surrounding enemies which can be effective if the player is surrounded and they are unable to climb ledges.

Unless the player wishes to farm these enemies for their items (they often drop Embers and Titanite Chunks), it is recommended to kill the infected Hollow before it can transform. The enemy will convulse and start emitting dark spores before it mutates, giving the player time to defeat or at least damage the creature before it can complete the transformation. 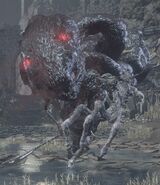 A Pus of Man emerges from the body of an infected Gundyr. 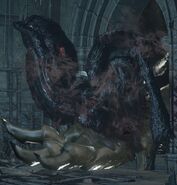 The infected hind leg of a Lothric Wyvern. 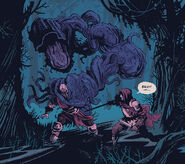 A Pus of Man from Dark Souls: Tales of Ember.
Add a photo to this gallery

Retrieved from "https://darksouls.fandom.com/wiki/Pus_of_Man?oldid=329292"
Community content is available under CC-BY-SA unless otherwise noted.