The Prowling Magus and Congregation is a boss in Dark Souls II.

This boss is found in Brightstone Cove Tseldora in a ruined Chapel, before the Chapel Threshold bonfire.

This boss is actually a large collection of enemies comprised of:

The Magus is a hexer donning a dark tattered robe, a Warlock Mask and a unique catalyst. The Congregation is made up of diverse types of hollows. Upon traversing the fog wall, the hollows are initially seen prostrating before the Magus. The Magus has his own health bar, but the health bar of the Congregation counts for all of the hollows.

The Magus was an evil warlock hailing from Aldia's Keep who partook in forbidden rituals, infecting its body and mind with dark magic. The Magus leads a small congregation of Hollows within a chapel, the remnants of Brightstone Cove Tseldora's ravaged population since the infestation of spiders. The hollows act as puppets to the Magus' will, and may be under the influence of the warlock's dark powers.

Benhart of Jugo can be summoned for this fight. His summon sign is at the Royal Army Campsite bonfire in Brightstone Cove, in the tent closest to the Undead Peasant that is amongst four bodies with loot.

The difficulty of this boss does not come from the boss itself, but rather the number of enemies. Killing the priests first is advised, as they can heal surrounding enemies and cast very strong Lightning miracles. By using Profound Still, one can make both the priests and the Magus unable to cast magic, which makes them considerably weaker for the duration of the battle.

There are two variants of hollows: Undead Laborers and Undead Supplicants. The laborers are faster and can surround the player with ease, while the supplicants will often be hindered by the benches placed around the area and won't pose any serious threat other than the occasional attack or hindering the player's movement. Any large sweeping attacks or spells with an area-of-effect are effective; for example, the Halberd's running attack (be wary of its durability, as hitting multiple enemies at once will degrade weapons quickly) or the Chaos Storm pyromancy. A well-placed shot of Soul Appease can also deal with most of the Congregation in one attack.

The Prowling Magus himself uses hexes which can deal a lot of Dark damage if they connect. However, he doesn't have much health and most of his attacks are fairly easy to dodge.

Hiding behind the benches is a good way to block the priests' lightning spear attacks and provides time to heal. However, any attacks connecting with the benches will destroy them.

These stats have been estimated through various formulae, and as such, may not be precise. Hollow Priests

These stats have been estimated through various formulae, and as such, may not be precise. Undead Laborers

These stats have been estimated through various formulae, and as such, may not be precise. Undead Supplicants 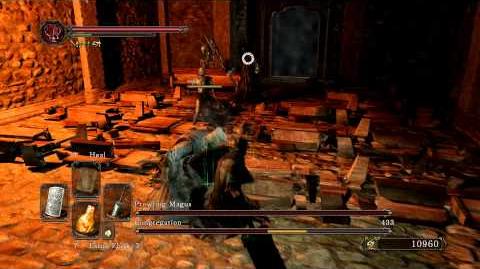 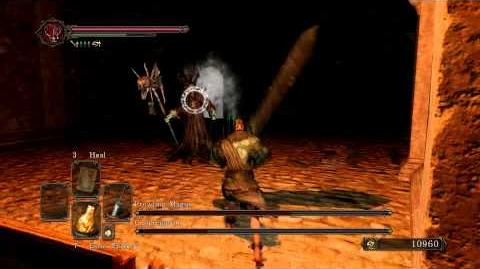 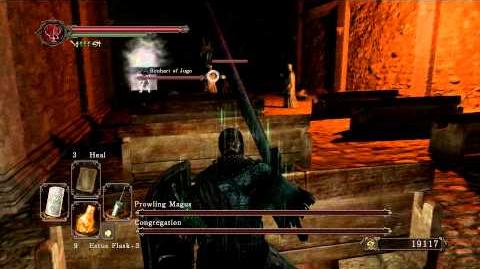 Retrieved from "https://darksouls.fandom.com/wiki/Prowling_Magus_and_Congregation?oldid=319334"
Community content is available under CC-BY-SA unless otherwise noted.