Edit
watch 01:30
Who is Pontiff Sulyvahn?
Do you like this video?
Play Sound

Pontiff Sulyvahn of Irithyll imprisoned a god of the old royalty in the abandoned cathedral, to be fed to the devourer.[1]

Sulyvahn is a tall man in ceremonial robes adorned with jewelry, he wears a crown over what appears to be a chain mail. His skin is very pale and seems to be decayed, covered in large cracks, and he does not appear to have a face. Due to his origins, it could be surmised that he was born this way.

Sulyvahn dual-wields two greatswords: the Profaned Ultra Greatsword in his right hand and the Greatsword of Judgment in his left. When the Ashen One enters the church Sulyvahn is seen standing still with his two swords, when the Ashen One approaches his swords light up and he starts slowly walking towards the player before quickly charging with an overhead slash.

During the fight Sulyvahn could be heard grunting and growling in a deep distorted voice as he attacks. It is unknown if he still has his sanity by the time the Ashen One confronts him.

In the large cathedral at the end of Irithyll of the Boreal Valley.

Though almost nothing is certain in the main game, Ashes of Ariandel reveals that Sulyvahn was born in the Painted World of Ariandel. From the unused dialogue in the Painted World, as well as the tree-like motifs on Sulyvahn himself, one can surmise that he is the son of the feral Tree Woman found in the painting. Despite being born and raised inside the painting, he had not yet experienced the loss or despair that most residents of the painting had prior to their arrival, which resulted in them being drawn into it. As such, he had no meaningful connection to the Painted World, and subsequently went on an indefinite pilgrimage outside the painting to the wider world, forsaking the frost sorceries that Ariandel had pioneered in favor of more esoteric magic.[2]

At one point, the young frost sorcerer found the Profaned Capital below a tundra some distance from Irithyll, and the Profaned Flame with it. Taking the Profaned Greatsword along with his ambition,[3] he set out to control Irithyll. He eventually accomplished his goal through subterfuge against the Darkmoon Knight, and used his Pontiff Knights to maintain control in Irithyll while the Outrider Knights were sent to conquer faraway lands. To make sure the Outriders never betrayed the Pontiff or opposed him, they were bestowed with certain rings that, unbeknownst to them, would eventually drive them mad with visions of endless combat and turn them into beasts.[4][5] For this reason, outrider knights were seen as exiles unworthy of praise, due to their inevitable fate as mere dogs of war for the twisted sorcerer's distant campaigns. Notable members among the Outrider Knights were Vordt and a distant daughter of the Irithyllian royal family, both of which were sent to conquer Lothric[6][7] prior to the Undead Curse' resurgence prior to the last true Age of Fire's rekindling.

After Aldrich rose from his coffin in the Cathedral of the Deep, he journeyed to the cathedral of Anor Londo with McDonnell, where Sulyvahn had imprisoned the god of the Darkmoon Dark Sun Gwyndolin and his sister Company Captain Yorshka after taking control of the city.

Once you enter through the fog gate, be cautious as you approach Pontiff as he will likely leap at you with his flaming sword from a distance. With good timing, this attack can be parried, immediately giving you the upper hand on him.

As most of his combos are mid or mid-long range, two-handed shield-less builds should roll behind him because the only attacks that hit behind his back are turning pirouette attacks (or jump and plunge attacks in the second phase) that are easier to dodge than his multi-hit combos. Pontiff also overcommits to some attacks and can be combo-locked giving a player from behind the chance to deal free damage. He will turn around but his turn is slow enough that a player can reposition behind his back. If Pontiff moves to mid-range, close the distance from the side and reposition behind his back.

During the fight, it is advised to not extend one's attacks for more than two swings as you would need your stamina to dodge or absorb Pontiff's aggressive retaliation. Sulyvahn's attacks can be difficult to avoid due to varying delays, rapidly chaining combos and large distance that they can cover. Watch out for the downward strike and impaling slide attacks that he performs - they are telegraphed and have long recovery time, giving you time to strike back or heal up.

Once Pontiff loses half of his health, he enters the second phase. The transition animation deals area of effect damage over its duration. At this point Pontiff starts using new attacks, including area of effect ground slams, long-range lunges and magic projectiles. At some point, he will summon a phantom copy of himself that performs each of the Pontiff's moves moments before he executes them himself. While it is possible to slay the phantom, the damage it takes is not drained from the Pontiff's own health, and as the Pontiff is also capable of re-summoning the copy should it die, one should avoid exclusively attacking it unless it's at low health already.

Pontiff Sulyvahn is extremely susceptible to parrying, each riposte dealing upwards of 1000 damage. A couple of his moves can be easily exploited as the swings of his flaming sword are usually telegraphed and can be predicted. Utilizing parry and riposte throughout the battle can end the fight quickly, leaving him close to death just as he begins to summon the phantom.

An easier method that forgoes parries (and even rolling) is to simply circle around him clockwise while raising a shield that offers 100% physical absorption. Circling left (Sulyvahn's right) will avoid almost every attack and allow you time to land one or two hits after most of his attack patterns. When he begins to summon a phantom start attacking immediately to kill the phantom as quick as possible and resume circling clockwise. Since this strategy allows you to steadily attack throughout the fight, it will typically end before he tries to summon another one.

Good fire and/or magic block, such as the Dragon Crest Shield, is recommended. 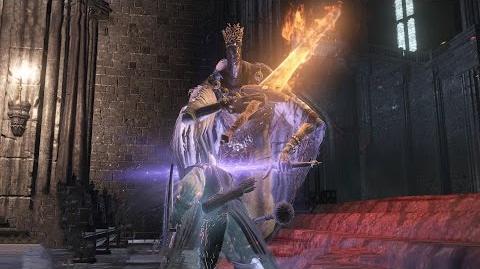 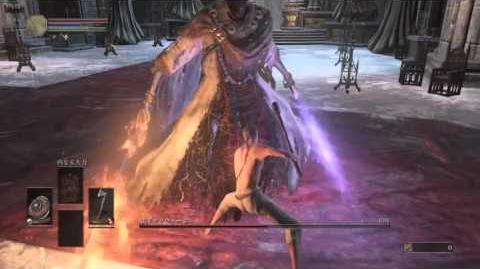