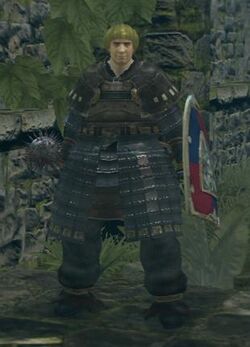 Firelink Shrine. Among the ruins up to the right in a room leading towards the Undead Parish lift.

Initially he will not have much to say and then give the player a Copper Coin as a token of good will. Eventually he will ask the player to join the Covenant of the Way of White. If the player says no to the Covenant question, the player may still join later. After more dialogue, Petrus will agree to sell miracles.

When prompted enough times, Petrus will mention an undead mission, and ask for a show of devotion in the form of 100 souls per player level. Paying him causes him to reveal information regarding bonfires. When denying the payment once, he will no longer offer the deal and refuse to further talk about it.

After the Capra Demon in the lower Undead Burg is defeated, Petrus is joined by Reah of Thorolund and two companions from the Thorolund Order (named Vince and Nico) in the Firelink Shrine. They are on a secret mission and will not talk much about what is going on. Once the game has been reloaded or the player leaves Firelink Shrine, the visitors will be gone and Petrus will not talk much about what happened.

Talking to Oswald of Carim will result in some implications and accusations against Petrus, claiming that his soul is drenched in sin.

Should Reah be discovered, but not brought back, Petrus reveals his dark side, relishing the chance to take advantage of her. If Reah is rescued, Petrus will eventually kill her and claim her items for himself. Killing Petrus after rescuing Reah prevents him assassinating her.

Not much is known about Petrus except that he knows of Reah, Vince and Nico's childhoods. Patches knows of Petrus, and his dark nature. Oswald of Carim is also aware of the sinister side of Petrus.

Petrus alternates between attacking with his Morning Star and defending with his shield, as well as healing once when brought down to about half health, and occasionally using force. Block, attack, parry and riposte as usual, and backstab him when he attempts to heal. Also, be cautious when blocking or tanking his hits as he can inflict bleed.

The following is content that is present within the code of Dark Souls, but not actually implemented in the game.
The audio and text were found in the fsb file "frpg_sm13.fsb" and fmg file "Conversation_.fmg" respectively.

The dialogue implies that Petrus would be imprisoned somewhere in The Catacombs, later returning to Firelink Shrine after being rescued.