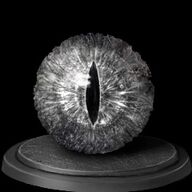 The Path of the Dragon covenant is a PvP oriented covenant in Dark Souls. By serving the Stone Dragon, Undead in this covenant are seeking to become dragons themselves.

There are no requirements to join.

Talk to the Stone Dragon in Ash Lake. To access Ash Lake, travel from Blighttown to The Great Hollow and get to its very bottom; upon arriving there, follow the path along the beach to its end.

Dragon Scales are offered to the Stone Dragon to rank up.

Leaving the covenant will render the Dragon Eye useless, but the Dragon Head Stone and the Dragon Torso Stone remain usable while losing any rank benefits.

Using the Dragon Eye spawns a summon sign in other players' worlds, allowing players who have Dragon Scales to summon covenant members to duel. The victor is awarded a Dragon Scale for their effort; players do not lose Dragon Scales upon defeat. Should the result be a draw (both players die near-simultaneously), both players are rewarded with a scale.

*Dragon Claw damage is inflicted while unarmed with the Dragon Torso Stone transformation.
**The buff always lasts 5 seconds, no matter what rank the player is in or what ring the player is wearing.

Covenant: Path of the Dragon

Discover the Path of the Dragon covenant 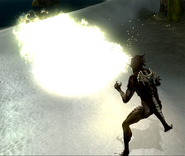 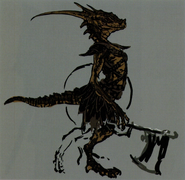 Concept Art
Add a photo to this gallery
Retrieved from "https://darksouls.fandom.com/wiki/Path_of_the_Dragon?oldid=320580"
Community content is available under CC-BY-SA unless otherwise noted.