Parry and Riposte are gameplay mechanics in Dark Souls II. They are special attacks that deal critical damage to enemies when performed at a specific time during a fight.

Note that riposte and backstabs are not considered counter attacks, thus they are not affected by the weapon's counter damage modifier and are not boosted by such effects as Old Leo Ring.

Listed below are some minor differences found in Dark Souls II, which may be slightly confusing to those who mastered these techniques in the original Dark Souls game.

Parrying is performed by pressing or holding the left-hand strong attack button (LT/L2) when using a Small Shield, Medium Shield, or 2-handed weapon. When a left-hand weapon is wielded with both hands, its right-handed moveset is reversed and the parry move must be activated using RT/R2 (instead of LT/L2). A parry can not be performed when using a power stance, but it is still possible to parry while using a power stance when the right hand weapon is a rapier.

A parried enemy will become staggered, causing them to fall to the ground. There are two possible riposte moves that can be triggered after parrying an attack: a standing riposte and a ground riposte (see below).

The following weapons can parry when equipped in the left hand:

The following weapons can parry when equipped to either hand:

The following shields can parry both spells and physical attacks, while in either hand:

Note that spells can only be parried, and not riposted.

The following attacks cannot be parried:

The following weapons use movesets of a different class, but can still be parried:

A riposte is a critical damage attack that can be executed after a successful parry (types 1 and 2) or a guard break (type 3). The exact calculations of riposte damage are not entirely clear, but thrusting weapons deal more critical damage than other types of weapons. The riposte damage is not related to the weapon's counter damage modifier (that one only affects counter attacks).

There are three (3) types of ripostes in Dark Souls II:

As with most attacks, performing a riposte or backstab with a broken weapon that has no scaling will deal no damage. 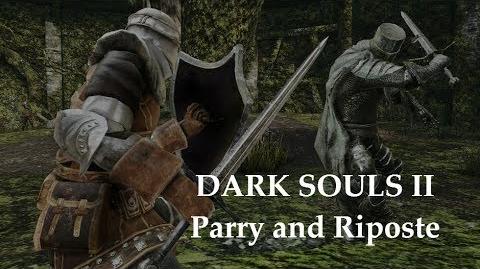 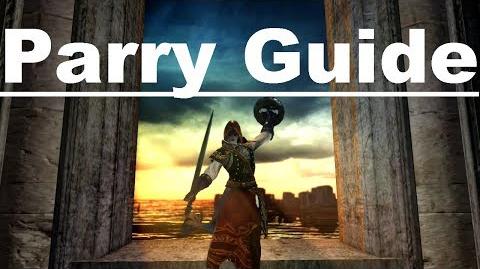