The Parry and Riposte is a form of critical attack in Dark Souls.

Players may perform a parry and riposte by first positioning themselves directly in front of a parryable enemy. As the enemy attacks, players may parry with their left-handed weapon or shield (the left-handed strong attack), deflecting their attack, and thus executing the parry. Enemies are momentarily stunned after this. Immediately after, the player can perform a light attack to execute a riposte.

Parrying does not always succeed, and requires precise timing. A parry that is executed too early or too late will grant the player some super armor, as well as some damage reduction from the attack that the player attempted to parry, but will not cause the opponent to be stunned or vulnerable to riposting. This type of parrying is often known as "partial parrying". Unlike full parries, partial parries can be used against almost any attack encountered in the game. Rarely, it is possible to both do a successful parry and still take damage. Parrying most often succeeds when the player is standing very close to his or her opponent, and on relatively even ground.

There are three different speeds of parrying: fast, normal, and special (long).[update link] Certain weapons, such as Thrusting Swords and Curved Swords, have a very fast parrying speed (thus, requiring more precision from the player), standard shields have a normal parrying speed, and certain specialized weapons and shields (such as the Parrying Dagger and the Target Shield) have a longer parrying animation. Weapons and shields that parry quickly have the advantage of allowing the player to recover from a failed parry more quickly, but weapons and shields that have a longer parry animation have a larger window of time in which their parries can be successful.

Almost every small and medium shield can parry, with some exceptions. Many weapons (when equipped on the left hand) can parry too. Weapons and shields that can parry are listed below.

Additionally, it is possible to parry attacks with a shield that the player does not meet the requirements to use, although the timing window is much shorter.

The riposte is a special attack executed directly after a parry, an execution move that deals extremely high damage (even more damage than a backstab). Ripostes deal high damage based on the base damage of the weapon and its critical rate. Certain weapon types, such as daggers, have higher critical rates than other weapons. Thrusting Swords have a hidden modifier that allow them to deal more damage with ripostes than what their critical rate and damage statistics would suggest. Wearing the Hornet Ring increases the damage dealt by ripostes, and (in some cases) changes the animation.

After executing a parry successfully, players have about one second to do the Riposte. During this time, they can also move or switch weapons, and still execute the Riposte successfully.

Ripostes cannot be interrupted. While in the motion of riposting, both the perpetrator and the victim are granted invincibility frames and cannot take further damage except for damage-over time effects such as being poisoned, under the effects of toxic, or while using Power Within.

Shields cannot perform ripostes. Although most weapons can riposte, there are some exceptions, as listed below. 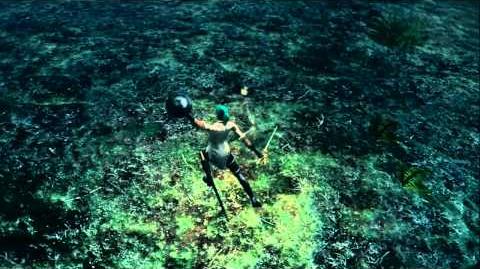 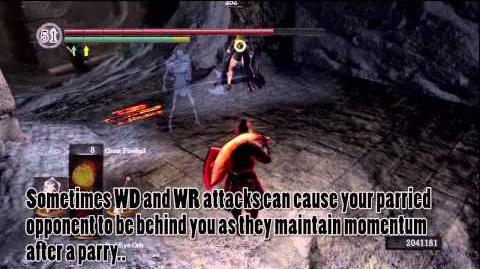 Dark Souls PvP Parry Instruction.
Information on parrying and riposting other players
Add a photo to this gallery
Retrieved from "https://darksouls.fandom.com/wiki/Parry_and_Riposte?oldid=327843"
Community content is available under CC-BY-SA unless otherwise noted.