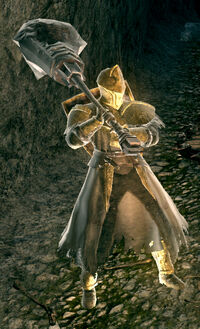 Paladin Leeroy is a character in Dark Souls.

Paladin Leeroy first appears as a summonable phantom for the Pinwheel boss fight in The Catacombs. His summon sign appears on a ledge that the player has to drop down on from the sarcophagus area.

Leeroy later invades the player near the waterfall in the Tomb of the Giants if the player is not Hollowed. Leeroy will not invade unless the player has placed the Lordvessel and hasn't defeated Nito yet.

Should the player defeat his phantom, they will find Leeroy's armor in Gravelord Nito's chamber.

Leeroy's Great Hammer, Grant, deals Strike and Magic damage and can hit overhead, so dodging rather than blocking may prove more useful. This overhead hammer attack has a slow recoil animation, so a sideroll followed by a backstab is an extremely effective strategy. His primary attack is also very easy to telegraph and parry. That said, he spawns on a very narrow ledge, so it may be challenging to not fall off. It helps to lure him back to a less limiting space. Although, the cliff can be used to the player's advantage with a well timed kick, if they do not mind losing his drops.

Leeroy employs Wrath of the Gods, an AoE spell that deals high damage and inflicts high knockback, particularly dangerous since he spawns next to a cliff. Rolling while he casts it will negate its effects.

Leeroy can heal with his Talisman, if given enough time. He may also posses enough Poise and defense to resist merely attacking him at this point, so be ready to backstab him if he tries this. 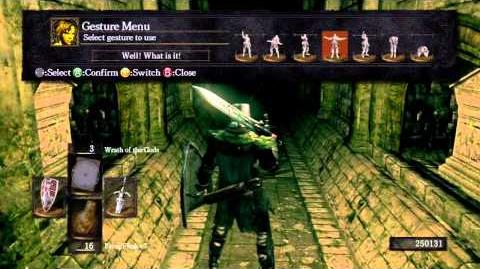 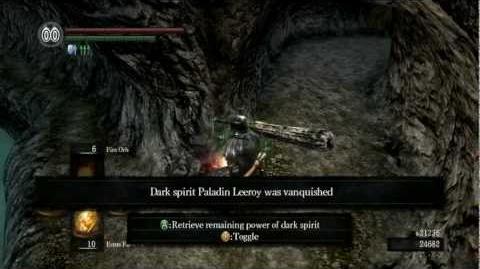