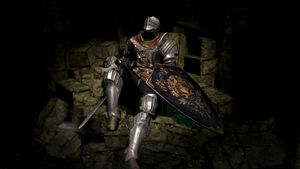 Oscar is a character in Dark Souls. He is voiced by Oliver Le Sueur.

Oscar is equipped with the Elite Knight Set, a Crest Shield, and an Astora's Straight Sword.

Oscar appears in the Undead Asylum, where he rescues the player character from imprisonment by dropping a corpse with the Dungeon Cell Key into the cell. He is later found dying, and asks the player to listen to his tale. If this request is granted, he will give the player an Estus Flask and the Undead Asylum F2 East Key. If the player had defeated the Asylum Demon in the first encounter, they will also be given the Big Pilgrim's Key.

If the player answers "No" to his question (refusing to hear his tale and request), the only way to obtain the Estus Flask and the keys is to kill Oscar or rest at a bonfire.

Regardless of whether the player killed him in the first meeting or left him to die, Oscar is encountered again in the same area upon revisiting the Asylum, as a Hollow enemy.

Oscar alternates between using his sword two-handed and one-handed and kicks for heavier stamina damage. His attacks deal decent damage, but he also moves slowly for an NPC enemy, allowing for plenty of opportunities to heal. He has the heavy roll, making it easy to strafe him.

Oscar was likely a high-ranking knight from Astora,[1] who was determined to seek out Lordran once he turned undead. Exactly how he ended up in the Undead Asylum and why he rescues the player is unknown, though it is implied that he was intentionally releasing undead from the Asylum in hopes that at least one would ring the Bells of Awakening.

There is a hole in the ceiling at the location he is first encountered, and since the Asylum Demon first appears descending upon the Chosen Undead to guard the exit from any undead hoping to escape, it can be assumed that Oscar had fought the Asylum Demon on the roof of the Asylum, but wound up crashing down into the squalid dungeon the player encounters him in.

It is implied that the ensuing despair he felt at being unable to even overcome his first obstacle as an undead is what turned him Hollow.

Has 1 HP and drops 100 souls when he first appears.

The following is content that is present within the code of Dark Souls, but not actually implemented in the game. Text was found from a text dump which can be found at: http://pastebin.com/hA42TwK8. 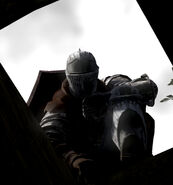