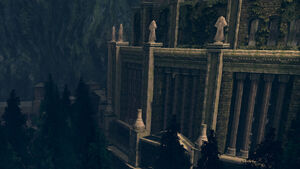 "Oolacile has brought the Abyss upon itself.
Fooled by that toothy serpent, they upturned the grave of primeval man, and incited his ornery wrath.
What could they have been thinking?"
— Marvelous Chester

The lost land of Oolacile is a location that no longer exists by the events of Dark Souls. Several sources[1][2] allude to its existence centuries beforehand and its focus on sorceries. Dusk of Oolacile states that the land "was reduced to ashes" long ago.

The later version of the game, Dark Souls: Prepare to Die Edition, comes with extra content that takes place in Oolacile 200-300[note 1] years before the events of the game, where the Chosen Undead must take the place of Artorias the Abysswalker and rescue Dusk from Manus, Father of the Abyss. During this period, Oolacile is slowly being swallowed by the Abyss. The content was later added as DLC to the console versions of the game as Artorias of the Abyss.

Traveling to the land of Oolacile can only be done after obtaining the Broken Pendant, which is dropped by a Crystal Golem in The Duke's Archives after speaking with Dusk of Oolacile. Approaching the area where Dusk is initially saved, with the Pendant in one's possession, will reveal a shadowy portal, which the player examines.

During the events of Dark Souls, Oolacile is not a location that can be visited. The Enchanted Ember is described as "a vestige of the lost land of Oolacile".[1] Dusk of Oolacile expands more on her home land during dialogue with the Chosen Undead, describing it as "the home of ancient sorceries". She explains that Oolacile's sorceries are more "of an approximation" when compared to those used by the Chosen Undead, but also reveals that she does not belong to this time and that Oolacile "was reduced to ashes" long ago.

The locations of both the Enchanted Ember and Dusk of Oolacile — in Darkroot Garden and Darkroot Basin respectively, as well as the Grave of Artorias located in Sif's boss area — imply that Oolacile was once located nearby. The maps of Darkroot Garden and Royal wood also have striking similarities.

Artorias of the Abyss[edit | edit source]

Main article: Artorias of the Abyss

In Dark Souls: Prepare to Die Edition or Artorias of the Abyss DLC, the Chosen Undead passes through part of Oolacile after traveling into the past; however, despite it taking place centuries before the rest of the game, the Oolacile Township is still fraught with hopelessness. The township has become filled with enemies (specifically Bloatheads, Bloathead Sorcerers, and a Chained Prisoner) as the Abyss spreads, and is seemingly deserted.

One of the Four Knights of Gwyn, Artorias the Abysswalker, arrived in Oolacile to rescue Dusk of Oolacile from Manus, Father of the Abyss, but fell victim to the Abyss. By the time the Chosen Undead found him, Artorias was hostile and engaged them in combat. After the Chosen Undead defeated the brave knight, they finish what Artorias had started, continuing through Oolacile Township and onward, eventually defeating Manus and rescuing Dusk.

Despite this, when returning to the current age and speaking to Dusk, she would simply note that the Chosen Undead looks a lot like Artorias (believing it was Artorias who rescued her from Manus), without expanding on whether or not the Chosen Undead's actions had any effect in saving Oolacile.

While speaking to Marvelous Chester, he would say that "Oolacile has brought the Abyss upon itself [...] Fooled by that toothy serpent, they upturned the grave of primeval man, and incited his ornery wrath", implying that either Kingseeker Frampt or Darkstalker Kaathe had a hand in Oolacile's downfall. Due to the inherent darkness of the Abyss, Darkstalker Kaathe is the more likely culprit.

"My home, Oolacile, is the home of ancient sorceries. [...]
The sorceries of Oolacile differ from the magic of thine age. It is difficult to explain... Oolacile sorceries are, what doth one say? They are somewhat... of an approximation. Thine sorceries are more straight forward, negating all but thy self. Dost thou not find some fascination in these discrepancies? [...]
My home of Oolacile was reduced to ashes, long ago, in my time."
— The little information given on Oolacile by Dusk of Oolacile while conversing with the Chosen Undead.

"Believe it or not... Oolacile has brought the Abyss upon itself. Fooled by that toothy serpent, they upturned the grave of primeval man, and incited his ornery wrath. What could they have been thinking? But to you and I, it's all ancient history. You have to ask yourself. Does it really matter? Heh heh heh..."
— Marvelous Chester gives more information on Oolacile while conversing with the Chosen Undead.

Chasm in The Royal Wood

The walls of Anor Londo towering high above 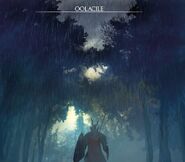 Oolacile as it appears in Dark Souls: The Age of Fire.
Add a photo to this gallery

Retrieved from "https://darksouls.fandom.com/wiki/Oolacile?oldid=328875"
Community content is available under CC-BY-SA unless otherwise noted.