The Old Dragonslayer is an optional boss in Dark Souls II.

The Old Dragonslayer can be found in the Cathedral of Blue. He is opposite to the Dragonrider and is accessible after raising the lever to lower the drawbridge.

In SotFS, a Guardian Dragon is present on the platform which has to be killed in order to lower the bridge.

The Old Dragonslayer's appearance and moveset is nearly identical to Dragon Slayer Ornstein's with the exception of dark magic attacks, as well as his armor being black instead of golden.

The Old Dragonslayer is a mysterious figure with little to no available information on him. It is unknown if this is the same Dragonslayer encountered in Anor Londo in Dark Souls, or perhaps an imposter using Ornstein's influence and equipment, or something else entirely.

Masterless Glencour can be summoned from a ledge just to the right of the Dragonrider's arena. A fearless tank knight wielding a greatsword and a shield, Glencour will immediately rush the Old Dragonslayer after stepping through the fog gate, and continue to distract and inflict moderate damage throughout the battle, making him an invaluable ally to those having trouble conquering the Old Dragonslayer in a one-on-one situation.

In Scholar of the First Sin, Devotee Scarlett can be found at the bottom of the stairs leading up to the spear-wielding Heide Knight and the Guardian Dragon.

Blocking until the Dragonslayer misses an attack may prove to be beneficial to the player, as well as backing away when he begins to cast his magic attack. Using a bow or crossbow may result in being able to stun-lock him by shooting him in the head. The Old Dragonslayer is weak to magic and is also vulnerable to lightning-based attacks. Sorceries can work out to be a viable tactic, if the player is able to anticipate his movements. Magical augmentations work very well against him.

Just as The Pursuer's cursing lunge is unblockable, so is the Old Dragonslayer's dark impaling lunge. It is predictable, and has some starting lag, so evasion is paramount to not suffering the massive damage of this move.

One highly effective strategy is strafing counterclockwise (player's right), as most of his attacks come from his right, making it especially hard to hit the player. It is possible to not have to block using this. 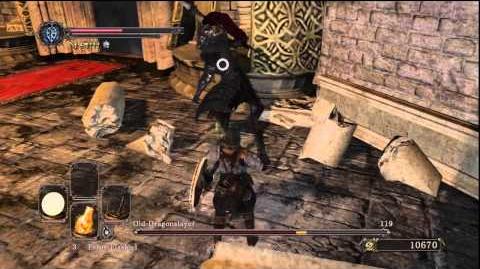