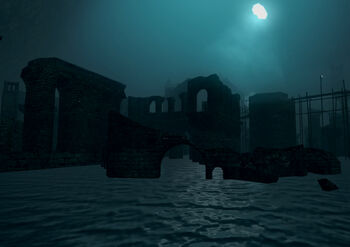 New Londo Ruins is a location in Dark Souls.

Waterfilled ruins located deep underground, accessed by taking the elevator directly beneath Firelink Shrine. Populated by passive Hollows and dangerous Ghosts. Once the water has been drained, the lower levels will be populated by numerous Darkwraiths. Piles of corpses fill the ground near the floodgates, a grim reminder of New Londo's tragic past.

The area is highly dangerous. Ghosts will constantly ambush the player from walls, floors, and ceilings. Falling into deep water is a major hazard and will result in death. The numerous Darkwraiths can also prove to be challenging enemies to new players.

There are no bonfires in the New Londo Ruins.

New Londo was once an Undead city[1] ruled by the Four Kings. However, the Four Kings eventually fell to the Dark, and their knights became the Darkwraiths. To contain this great evil, New Londo was flooded and sealed away, sacrificing both the city and its inhabitants. Three sealers were appointed to watch over the ruins and await the bearer of the Lordvessel, who is destined to defeat the Four Kings. By the time the Chosen Undead reaches New Londo, only one of the sealers remain.