That creature, she was human, once, you know.
Hmm, In fact, she was wed to the Prince of that nearby castle.
But her husband, hmm, he had feelings for another.
The Princess was desperate, and sought eternal beauty.
Hoping that it would restore the Prince's, ah, affection, ha you see what I mean.
Before long, the Princess' ire transformed her into a monster.[1]

Located at the end of Earthen Peak.

A decapitated nāgá, holding a spear in one hand and her severed head in the other.

Mytha was formerly engaged to the ruler of her kingdom (hypothesized to be either the Old Iron King or, more likely, the Prince of Alken). Unfortunately, he had no affection for her in spite of her beauty and fell in love with another. The knowledge of this drove her mad, causing her to start consuming poisonous substances that would supposedly increase her beauty. Instead, the substances only corrupted her and transformed her into a monster. Subsequently, she was exiled to Earthen Peak. Using the Manikins as servants, Mytha converted her prison castle into a giant machine which pumps more poison into her personal chambers, since, in her monstrous form, it keeps her young and immortal.

A man that is believed to have loved her followed alongside. However, as she was oblivious to the affections of any other man that was not the king, his feelings were ignored. That man is said to have transformed into the monster known as the Covetous Demon.

Jester Thomas can be summoned from a sign just to the right of two Grave Wardens outside the corridor to Mytha's fog gate. He is a ranged ally, dual-wielding two pyromancy flames. His powerful fireballs can often cause Mytha to focus completely on him, leaving her defenseless against attacks from behind. He can defeat her all by himself.

In Scholar of the First Sin, two additional summons are available: Devotee Scarlett and Bashful Ray, below and above Central Earthen Peak, respectively.

The main threat in this battle is not the Queen herself, but the poisonous pool in the room in which she is fought. This poison will drain the player's health at a dangerous rate and slowly heal Mytha throughout the fight. However, this can be averted; burning the windmill opposite the Central Earthen Peak bonfire with a torch will reduce the pool to being only around the sides of the arena.

With the poison no longer a threat, this boss can still be difficult. Her moveset mostly comprises spear attacks or using her head to shoot bolts of magic. Her attacks are quick and cover a lot of room, so light armor is best for this battle. The player can cut off her tail to reduce the range of her "Tail Swipe", and prevent her from using her "Tail Grip" attack, but the player gains no items from doing this.

On the offensive, this fight is not as hard as it may seem. The player just needs to take their time and watch her attack patterns, which can all be dodged easily if under 60% carry weight. Depending on her attack, she may be left wide open to one or two strikes. She also appears to be weak against fire, so Charcoal Pine Resins, Firebombs, and pyromancies can all help, although they are not really necessary if the player is careful.

Time between attacks can also be used to quickly use a Lifegem or two after your health starts getting toward the halfway mark. As long as the player takes their time, watches her attacks, and can move quickly enough, this boss fight will be reasonably easy to moderate even on NG+.

Spear Slam: The Queen stabs twice with her spear and sometimes ends with a downward strike. Has good tracking, so be sure to dodge at the right moment.

Lunging Thrust: The Queen rushes quickly forward with her spear and stabs. This attack has long range and is carried out quickly.

Tail Grip: The Queen reaches out with her tail to grab the player and crushes them dealing high damage.

Tail Swipe: Done when the player is behind her, she swipes her tail to the left. Quite difficult to dodge.

Serpent Spin: The Queen lifts up her spear and quickly spins around three times.

Arrow Spread Shot: The Queen raises her severed head and shoots out multiple bolts of magic with a scream, that fan out horizontally.

Head Bomb: Mytha throws her severed head in front of her and it explodes after a short delay. Be sure to dodge the attack as it can do very high damage.

Where Mytha's head used to be

Constricting the Bearer of the Curse

Close up of her head

Side view of Mytha's head 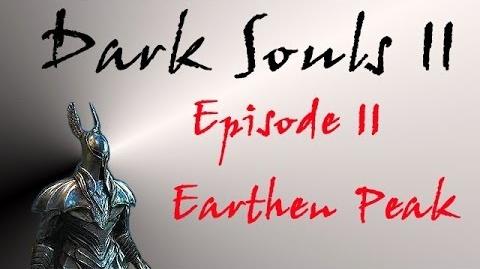 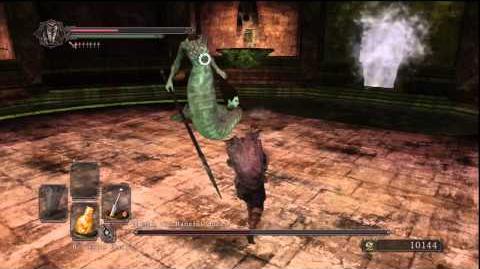 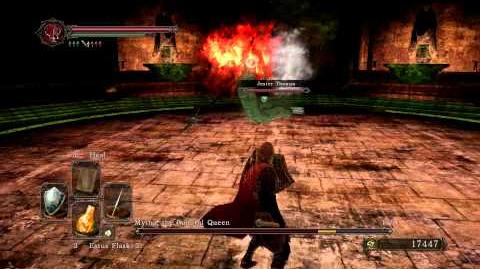