Murkmen are enemies in Dark Souls III: The Ringed City.

Some of the murkmen who rise from the depths are possessed by soul dregs, which have a grave likeness to the human form.[1]

They are bony, highly humanoid entities made of animated dark soul dregs, wielding weapons born from the murk out of which they rise. None of them appear to have the requisite body parts for bipedal movement, crawling around on the ground, but some stand with the aid of bladed staves.

They are the dominant enemy faced in the Dreg Heap, until one reaches the next section, wherein they no longer appear in the game.

The Murkmen are abyssal entities that rose from the Deep, due to the concentration of dregs as the world collapsed on itself, and are possessed by the very darkness which accrued to generate them.[1]

Four varieties appear in the game, the primary being the crawling murkmen wielding hand scythes, which will reach up and attempt to swipe at the player. They are often being summoned by murkmen utilizing longstaves, discernible from the longstaff fighters by the aura of the Deep surrounding the tips of their weapons. Killing them will prevent more murkmen from coalescing, but they will fight those that come too close (though they will not give chase like the staff fighters), and will cast projectiles that track with increasing speed. One certain variety will explosively transform into its true form, a massive gripping Humanity sprite charging toward the player before hitting an object or dissipating moments later.

A Murkman degenerating into Soul Dregs. 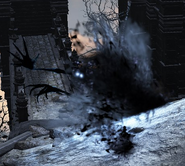 A Soul Dreg spirit.
Add a photo to this gallery

Retrieved from "https://darksouls.fandom.com/wiki/Murkman?oldid=329559"
Community content is available under CC-BY-SA unless otherwise noted.