Increases Magic resistance by 40. Has a unique strong attack.

The Moonlight Greatsword is a greatsword in Dark Souls.

This sword, one of the rare dragon weapons, came from the tail of Seath the Scaleless, the pale white dragon who betrayed his own.

Seath is the grandfather of sorcery, and this sword is imbued with his magic, which shall be unleashed as a wave of moonlight.

The Moonlight Greatsword can be obtained from Seath the Scaleless by cutting off his tail.

Although the Moonlight Greatsword's attack type suggests the weapon deals Regular damage, this likely only refers to its moveset pattern, as the sword deals solely Magic damage.

A very popular weapon for intensive Intelligence builds due to its high scaling. Its strong attack (be it one-handed or two-handed) releases a magic-based projectile that deals damage based on the Intelligence of the player, though it depletes some of its durability (20 per use one-handed, 40 per use two-handed), it's a very powerful attack with the right scaling, and its good reach makes it perfect for various situations, however, it requires a very specific build to be truly effective.

It also raises the player's magic defense by 40 points.

The Moonlight Greatsword's projectile will go through enemies that block it, potentially hitting a wall and exploding, hitting through the block and dealing full damage.

The Moonlight Greatsword cannot be enchanted. 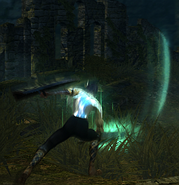