Start a Wiki
watch 03:08
'Dark Souls' Lore: Moonlight Butterfly
Do you like this video?

Moonlight Butterflies are one of Seath's many creations.[1] A very large butterfly, it is one of the most mysterious creatures in Dark Souls. Aside from its strong magical powers, it has no visible head or legs and shows a wheel-like device between its upper wings. Moonlight Butterflies are capable of firing various magic attacks, but they don't have any melee capabilities.

The Butterfly in the Darkroot Forest is a boss and attacks as soon as its room is entered, but those found in the Crystal Cave are passive and will not attack the player unless provoked. 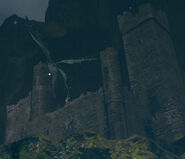 Artwork
Add a photo to this gallery

Retrieved from "https://darksouls.fandom.com/wiki/Moonlight_Butterfly?oldid=330633"
Community content is available under CC-BY-SA unless otherwise noted.