Monstrosities of Sin are enemies in Dark Souls III.

Monstrosities of Sin are vile hulking beasts with a massive hand for a face. The palm has a gaping hole lined with teeth, reminiscent of the giant hand of Manus, while their belly is filled with countless unblinking eyes.

They can usually be found sleeping, allowing the player to deal the first blow. Although sluggish, they are powerful creatures that are capable of leeching souls from the player.

These four creatures were the female relatives of a certain but unnamed oracle, and while they could have been the creators of the Profaned Flame via their curse, they held absolutely no concern over their deeds or the effects they would have.[1]

Found in the Profaned Capital. Only four appear in the game, all of them inside of a ruined church located amongst the toxic swamp. Three are found in a room at ground level, while a fourth dwells in another room above.

These enemies are very slow but inflict heavy damage and have a large amount of vitality. They also react surprisingly fast at the player's attempts to keep some distance, diving, rolling and slamming their back to reach them. It is recommended to draw them out of the temple one at a time and slowly wear them down with ranged weapons from a distance.

The player can also attack their sides, although they will frequently retaliate with rolls and body slams. If they attempt a grab attack, the player should immediately evade to the side, as the attack animation propels them forward. This attack deals heavy damage and will automatically drain some souls. When they stand up on their hind legs and walk toward the player, hitting them with a strong attack will knock them down into a sitting position, from which the player can riposte them for high damage.

Alternatively, if the player has acquired the Silvercat Ring, has access to Spook, or if they are willing to sustain the damage, the trio of monsters found at the bottommost chamber can be dealt with plunging attacks by luring them out, climbing the ladder on the far right and then landing on them with a couple of attacks from above.

These creatures are very susceptible to Bleed damage. Using a fast-hitting weapon buffed with a Carthus Rouge is highly recommended.

A sleeping Monstrosity of Sin. 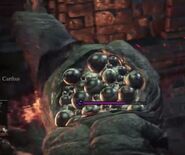 The bulging eyes in their stomach.
Add a photo to this gallery

Retrieved from "https://darksouls.fandom.com/wiki/Monstrosity_of_Sin?oldid=330185"
Community content is available under CC-BY-SA unless otherwise noted.