Mimics are a type of non-respawning enemy encountered in Dark Souls.

Mimics disguise themselves as chests, waiting for victims to try to open them. When a player attempts to do so, Mimics will proceed to chomp on them in a special grab move, causing heavy damage.

If Mimics are hurt before they can grab a player, they reveal a large, lolling tongue and lines of finger-bone teeth, followed by the arms and legs. Once upright they will begin to aggressively pursue their prey. Mimics are fast, tough, and deal high damage; they can easily kill the unprepared.

In order to determine the difference between a Mimic and Chest, the most direct visual cue one can get is by looking at the chain connected to the right side of the chest. If the chain is wrapped in a circle then the chest is safe, if the chain is straightened out then it's a Mimic.

Mimics were part of a long lost clan, exiled for the sin of avarice.[1]

A total of nine Mimics can be encountered in the game:

* Damage listed is per chew.

† Only applies when opening a Mimic.

*Guaranteed from last mimic in The Duke's Archives if not yet obtained. 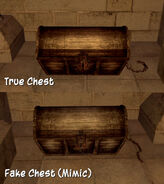