When the fabled Millwood forest was discovered it was a vacant ruin. The only thing left was the Eternal Oak, stood rotting. No corpses were discovered, yet their belongings lay neatly on the ground.[1]

Large, powerful enemies outfitted with the Millwood Knight Set, albeit a much larger variation. They wield varying tools including an axe and shield, greathammer, greatbow, or in a special instance, a greataxe known as Earth Seeker.

Common enemies throughout the Painted World of Ariandel.

The Millwood Knights were once inhabitants of a place called the Millwood Forest, a fabled land. It was home of the Ethereal Oak, a sacred tree to them, and from the antlers of a blessed beast they adorned their helms. Millwood was known to practice a primitive sort of worship, directed towards the very earth. They fought with the power of the earth itself, with their chieftain knights serving also as their high priests, calling forth massive quakes onto their foes. With their greatbows and great arrows, made of black oak, the knights fought the Abyss Dragon, a being of unknown nature that was their sworn enemy.

By means unknown, the forest was left in ruin, and the knights went on a journey towards an uncertain purpose. Eventually, they cared not for the Abyss Dragon, and they were drawn into the Painted World of Ariandel, where they found a new wood to call home and live to this day. Explorers who later discovered the ruins of the ancient forest found the Ethereal Oak rotting there and the belongings of the knights laid about proper by caring hands, though the knights were not found.

Millwood Knights are not very tough adversaries if the player has good dodging skills. Their attacks are very slow and have a long windup time, making them quite easy to telegraph. However, if hit, their attacks do heavy damage and will almost completely drain stamina if blocked. They are susceptible both to parries and backstabs. However, they can be tough to parry due to the occasional delay of their attacks that can trick the player into attempting to parry too early, ensuring they get hit.

The greatbow-variant has a very extensive aggro range and will begin continuously sniping at the player from afar until they have been directly engaged via melee attacks. At which point they will immediately switch to an axe and shield. If the player evades, they will once again switch back to the bow and resume shooting. The greatarrow projectiles inflict heavy damage if hit straight on, but also explode after a few seconds, dealing even more damage due to the bow's Pierce Earth skill.

They are capable of using a special version of warcry which entails them charging toward the player for a second or two, then releasing a warcry along with an aura that staggers the player. After this, they will immediately begin attacking. When buffed, they do extra damage and are also more aggressive. Their attacks will also be delayed a bit in favor of a long charge-up attack that if connected, is possible of instantly killing players with lower vitality.

Their Chieftain-Knight (more accurately described as a High Priest) wields an Earth Seeker. This variant is much more aggressive and when at a distance, will use the weapon's skill, Earthen Wrath, to continuously release an area-of-effect earthquake from afar that will send foes skyward while dealing heavy damage. The effect has superior tracking and will continue to form around the player until the effect has finished. The knight will continue to do this until he is engaged via melee attacks. Regular tactics should be followed for fighting him at melee range. 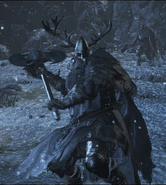 Earth Seeker variant.
Add a photo to this gallery

Retrieved from "https://darksouls.fandom.com/wiki/Millwood_Knight?oldid=331674"
Community content is available under CC-BY-SA unless otherwise noted.