For other uses, see Patches (disambiguation).

"You be careful, too, my friend.
For trust can be a dangerous thing."
— Mild-Mannered Pate

Mild-Mannered Pate is a character in Dark Souls II.

Pate is a treasure hunter who, as his nickname indicates, is known for his gentle and friendly demeanor towards others. Pate is encountered in several locations throughout Drangleic and he will lend his hand to the player in many ways, such as offering his assistance for fighting one of the bosses or pointing the way toward various treasures, not before warning the player, telling them that they will have to overcome several traps ahead if they attempt to get the treasure.

Although at first sight Pate looks like someone who can be trusted, it is revealed later in the game that he may have a sinister side as well. His former partner in crime, Creighton of Mirrah, claims that Pate is a deceiving and greedy man, as well as an expert manipulator who uses his charming behavior to trick other people. It is also implied that Pate, like Creighton, is another psychopath. He is believed to murder other people in order to get all the loot for himself. It is unknown, however, why he decides to help the Bearer of the Curse every time they meet, although it could be implied that Pate acts this way in order to gain the player's trust, so that they can side with him in his final confrontation against Creighton. Creighton's description also more closely matches himself than Pate, as Pate may be generally friendly but not particularly charismatic while Creighton tries to flatter the Bearer of the Curse and frequently acts paranoid and suspicious. This is also supported should either of them survive without the player's intervention - Pate will simply question what happened with astonishment while Creighton will assume the player not interfering was because they were friends with Pate and tell them to leave in a threatening manner, as well as demanding the Ring of Thorns should the player have killed Pate earlier and equipped it. However, despite this, both characters' true intents are still somewhat ambiguous, leaving the player to decide who if either to trust.

Little is known about Pate's past. It is known that, at some point in his life, he met the serial killer Creighton of Mirrah, and decided to join forces with him during their journey through Drangleic.

However, Pate and Creighton had a dispute over some treasure which ended up in both men trying to kill each other. In the end, Pate managed to lock Creighton away in one of the cells of Huntsman's Copse (although it is later revealed that the cell itself was originally a trap devised by Creighton to lock Pate away).

Mild-Mannered Pate is encountered for the first time in the Forest of Fallen Giants. Upon talking to him, he reveals to the player that he has come to Drangleic on a treasure hunt, and he warns them about a group of bandits who are preying on travelers in the area. Exhausting his dialogue after exploring the area through the gate behind him will result in Pate rewarding the player with the White Sign Soapstone.

Pate can be summoned as a white phantom for the fight against The Last Giant following this encounter. His summon sign can be found just outside the fog gate.

Pate is revealed to have a more sinister side after the player finds his believed-to-be partner, Creighton of Mirrah. Creighton claims that Pate is always running in and stealing the treasure, even though Pate claims the opposite. Pate says that his partner fell into a trap, which is later discovered that Creighton designed this trap to keep Pate incapacitated. In an unfortunate turn of events, Creighton traps himself, and is later released by the player. Creighton vows revenge on Pate.

Pate reappears in Earthen Peak. He is found in a room filled with poisonous pots. If he was summoned for The Last Giant and lived through the fight, he will give the player Pate's Armor Set, as well as his shield, spear, and the Ring of Thorns. Pate will tell the Bearer of the Curse that there is another treasure beyond another trap. Upon getting the treasure, he warns you of who to trust, makes a remark saying "I heard that a man is out for my life...The poor bloke must have quite an imagination, heh." (exact quote). This is referring to Creighton of Mirrah, the Wanderer you find at the third Huntsman's Copse bonfire. If you collect the treasure before encountering Pate in Earthen Peak, he will still appear in the Brightstone Cove after you've exhausted his dialogue.

He then appears in Brightstone Cove Tseldora across the gap from the Chapel Threshold bonfire where you find him in a fight against Creighton, both he and Creighton are target-able and once one dies the other becomes non-hostile. The player may choose to help either one. The Tseldora Den Key will be obtained from the survivor of the fight given that the player has dealt enough damage to the other; in that case the survivor will also attempt to kill the player with a booby-trapped chest. Creighton's armor set will be obtained from Creighton only in the case that you help him defeat Pate. If the player assists neither and lets them fight to the death, the survivor will not give the player the Tseldora Den Key and it will become unobtainable. 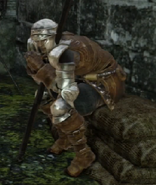 Pate in the Forest of Fallen Giants 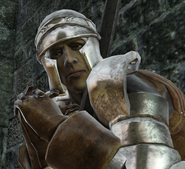 A close-up of Pate´s Face

Pate as a phantom 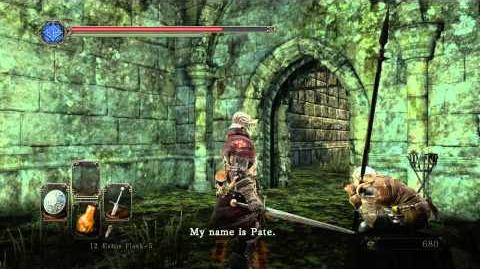 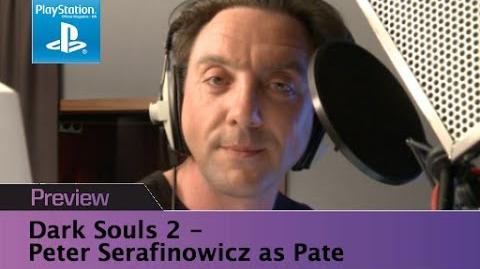