"You may travel light, but methinks you bear a burden of your own."
— Merchant Hag Melentia

Merchant Hag Melentia is a merchant in Dark Souls II. She is voiced by Marcia Warren.

Found in the Forest of Fallen Giants, next to the Cardinal Tower bonfire.

After exhausting all of her dialogue and defeating The Last Giant boss, she moves to Majula, and settles on the left of the bonfire next to the wall.

She sells various wares to the player including pieces of armor, weapons, and sorceries. She will also sell the armor sets and weapons of certain characters if the player has killed them. If the player speaks to her, she provides some information about Drangleic's backstory. Melentia also sells Lenigrast's Key, which opens Blacksmith Lenigrast's workshop in Majula, allowing the player to use his smithing services.

The Covetous Silver Serpent Ring +1 can be gifted to the player by spending 10,000 souls in her shop and exhausting her dialogue.

The traveling merchant Melentia is one of the few Drangleic survivors. She is always seen carrying her wares on her back. Melentia also seems to be slowly losing her mind.

When she becomes hostile, she can inflict Curse buildup, instantly turning the player Hollow if the meter should fill. 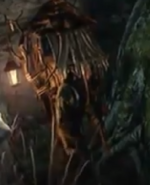