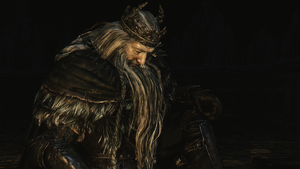 The Memory of the King is a location in Dark Souls II.

Upon downloading the Crown of the Sunken King DLC and obtaining the Ashen Mist Heart, the player can enter a memory of Vendrick from before he went hollow. The memory is accessed through the pile of armor in Vendrick's arena, whether or not he has been slain. In the memory, Vendrick will be unhollowed and completely sane, allowing one to speak with him.

If the player has obtained the King's Crown along with the rest of the ancient crowns (Crown of the Sunken King, Old Iron King and Ivory King) and bring them to Vendrick in this place, he will grant them his blessing, which infuses them all with a hidden ability that prevents the player from becoming hollow by any means while wearing any of them and also grants immunity against the Curse status ailment.

Retrieved from "https://darksouls.fandom.com/wiki/Memory_of_the_King?oldid=328890"
Community content is available under CC-BY-SA unless otherwise noted.