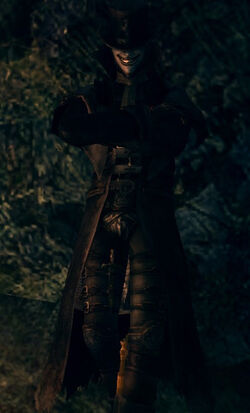 "Hm...Oh, let me guess...Snatched by a shadowy limb, and dragged off to the past?...Yes, of course. Exactly what happened to me. We are both strangers in this strange land. But, at least now there are two of us."
— Marvelous Chester

Marvelous Chester is a character and merchant in the Artorias of the Abyss DLC of Dark Souls. Like the player, he was dragged back into the past, into the realm of ancient Oolacile. He's voiced by William Houston.

Marvelous Chester is an enigmatic entity who sells a variety of useful items such as Green Blossoms and various moss clumps, albeit for a higher price than normal. This makes him a very convenient stop for stocking up on items for the nearby Battle of Stoicism arena.

Marvelous Chester was dragged into the past by Manus, Father of the Abyss. Little else is known about him. Given that his preferred weapon of choice is the Sniper Crossbow, it is likely that Marvelous Chester is from Carim.

Marvelous Chester is dangerous at mid-range, as his bolts and his throwing knives can quickly rack up damage. In particular, his special throwing knives, which he throws in threes, greatly build up Bleed. At long range, he is capable of firing multiple bolts at the player in quick succession, possibly dealing heavy consecutive damage. At close range, he performs sweeping low kicks that do a fair amount of damage and stamina drain. Marvelous Chester also has an unusually high amount of HP for an NPC. 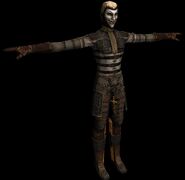 A close up of Chesters mask