Manus, Father of the Abyss

Edit
watch 06:22
'Dark Souls' Lore: Manus, Father of the Abyss
Do you like this video?
Play Sound

Manus, Father of the Abyss

Chasm of the Abyss

"If thine wish is to succeed poor Artorias, and challenge the spread of the Dark, then thou must face Manus, Father of the Abyss. The Dark emanates from Manus himself. Even if this land shall expire, thou may be able to prevent further corrosion... But even so, one day the flames will fade, and only Dark will remain. And even a legend such as thineself can do nothing to stop that."
— Hawkeye Gough

It is possible to summon the past version of Great Gray Wolf Sif to aid in the battle. Sif's summon sign is found in the arena where the player fights Manus, inside the fog door.

Once the Chosen Undead has the Broken Pendant in their possession, Manus pulls them through a magical rift from Darkroot Basin into the past land of Oolacile.

He is discovered to have kidnapped Princess Dusk and is eventually confronted in the Chasm of the Abyss.

Manus was a primordial human. The people of Oolacile were fooled by a serpent — presumably Kaathe — to excavate Manus's grave, which incited his wrath.[1] This caused his humanity to go wild, leading to the creation of the Abyss.[2] Manus went mad, eternally seeking his precious Broken Pendant.[3]

As the Abyss threatened to swallow the entirety of Oolacile, Knight Artorias, one of the Four Knights of Gwyn, travelled to Oolacile to face Manus. Artorias, a hero with nary a murmur of dark, was no match for the Father of the Abyss, and found himself corrupted by Manus' darkness.[4]

Manus' power and his desperation to find his pendant were so great that he began snatching individuals from across time. One of these individuals would succeed in finally defeating Manus and saving Oolacile.

After his defeat, his soul split apart into fragments. Eventually some of these soul fragments became self-aware and formed into their own entities. The fragments known to have done this became Nashandra, Elana, Nadalia and Alsanna.[5]

It is possible for the player to kill Manus outside his fog gate:

If the player wishes to face Manus conventionally, it is advisable to equip Stamina-boosting items that such as the Cloranthy Ring, as well as a high-Stability shield that blocks physical damage. Only attack Manus after he finishes his jumping smash or frenzy combo, lest you be caught in the middle of his strikes.

Manus will start using his magic attacks at around 50% health. Use the Silver Pendant to deflect them, as they are difficult to dodge.

The Silver Pendant, although not required, can be of great help as it blocks his magic attacks if used with correct timing.

Great Grey Wolf Sif can help in this battle. Whilst Sif's attacks are not very damaging, the extra summon can keep Manus distracted and give the player time to heal. It is wise to only summon Sif after Manus is below half health, to distract him in his harder phase, making it less likely the player will be targeted by the Dark Orb barrage attack.

Sif's summon sign is inside the Manus's arena, directly to the left of where the player spawns. As a result, Sif can only be summoned during the fight. Thankfully, Sif is summoned instantly after touching the sign, without the usual white phantom-summoning animation.

Manus briefly holds up his shadowy limb then brings it down at the player. This attack can reach more than halfway across the boss arena and breaks the guard of most medium-stability shields, dealing moderate damage to the player. It can be dodged by rolling in any direction during its downswing. This attack is telegraphed by rapid movement along his shadowy limb.

If the player is behind Manus, he can twist his arm all the way around to defend his back.

Manus jumps high above the player, then slams down with his catalyst and hand. This causes the player to lose their target lock afterwards.

Manus lets out a quick scream which makes him mad, then performs four swipes and two downward smashes, potentially hitting the player six times. This deals high damage, and drains a lot of stamina if blocked.

Manus uses his Catalyst to cast a barrage of Dark Orbs, similar to the sorcery Dark Bead. The Dark Orbs spread out in a fan shape, making it easier to evade by strafing/rolling at close range. The Dark Orbs also drop to the ground after a moment, limiting the range of this spell.

Manus telegraphs this attack by holding his Catalyst out to his left, charging it for a moment, then swinging it towards the player to release the Dark Orbs. This attack can break the guards of most shields, so try blocking it with the Silver Pendant.

Manus casts a dark sorcery where multiple Dark Orbs appear in the air above and rain down around him in a sizable area of effect. Each Dark Orb can home in on the player within a certain range. The player can use their invulnerability frames from fast rolling (12 invulnerability frames, 14 with the Dark Wood Grain Ring). Alternatively, use the Silver Pendant — it does not stop the Dark Orbs, but holds them in place above the player if you remain still, letting you roll away before the Silver Pendant wears off.

Dark Orbs propagate from above Manus, surrounding the entire arena before homing back in on Manus. This attack covers the entire arena, except for the area right next to Manus, like an inverted AoE. Dodge it by getting as close as possible to Manus once he starts casting. The Silver Pendant can also block this attack. 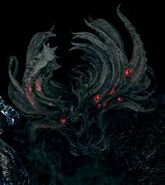 Manus emerges from the darkness of the Abyss.

The huge hand of Manus.

The eyes of Manus, faintly visible under the fog door.