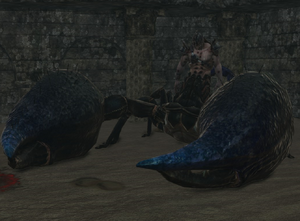 Manscorpion Tark is a character in Dark Souls II.

Manscorpion Tark is a large half-human, half-scorpion hybrid residing in the Shaded Woods. He can be summoned for the boss battle against Scorpioness Najka once his dialogue is exhausted, though the Ring of Whispers is required to do so. His sign can be found on the ground directly outside Najka's fog gate.

Manscorpion Tark and Scorpioness Najka were once a peaceful couple living a quiet existence in the Shaded Ruins. But as time passed, Najka slowly began losing her mind and became more and more violent and unreasonable as a result. A war began between Tark and Najka, and has been waged for many years before the player's arrival. If spoken to while wearing the Ring of Whispers, Tark requests that the player defeat Najka, leading to the placing of his summon sign outside her fog door.

Scholar of The First Sin:

Tark explains that he and Najka were created by a "master" who has long since disappeared. It can be strongly assumed that Tark and Najka are experiments, similar to The Duke's Dear Freja, possibly sharing the same "master" or creator. He also claims that he and Najka are the only two of his kind that can speak "the human tongue", implying there may be more scorpion hybrids, or experiments located across Drangleic and beyond. It is implied that Tark and Najka's creator was Duke Tseldora.

Also, Tark mentions that his "master" was born with a fatal flaw, which provoked hatred against his peers. In time the "master" also lost his mind because of his research. This may be a reference to the first game, as this description is very similar to that of Seath the Scaleless.

Tark as a phantom
Add a photo to this gallery

Retrieved from "https://darksouls.fandom.com/wiki/Manscorpion_Tark?oldid=329016"
Community content is available under CC-BY-SA unless otherwise noted.