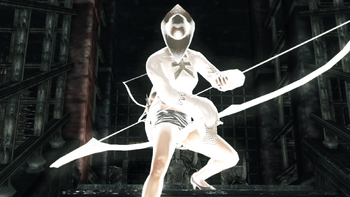 Manhunter O'Harrah is a white phantom exclusive for Dark Souls II: Scholar of the First Sin. She can be summoned for fighting against the Old Iron King, the Duke's Dear Freja, and Lud and Zallen.

Found in the room that contains the Lightning Short Bow. Appears once the fire has been deactivated by throwing the lever near the Eygil's Idol bonfire.

Found in the hall filled with Parasite Spiders that precedes Freja's pit room.

Found at the area with graves near the beginning of the map, to the right of Vengarl's summon sign.

Retrieved from "https://darksouls.fandom.com/wiki/Manhunter_O%27Harrah?oldid=327933"
Community content is available under CC-BY-SA unless otherwise noted.