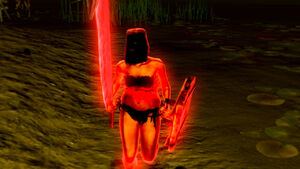 Maneater Mildred is an enemy and phantom in Dark Souls. She is a cannibalistic woman wearing a Sack and wielding a Butcher Knife.

Maneater Mildred has no dialogue whatsoever, and her appearances are brief. As such, little is known about her. She was probably included in the game to give offline players a taste of invasions and co-op play.

Maneater Mildred moves quickly, but her attacks are slow, and don't do that much damage. She also can't block attacks very well and can be stunlocked by any weapon. Mildred can be easily backstabbed or parried. On the other hand, fighting her can be dangerous as she spawns inside a poisonous swamp with movement impediments. It is recommended to lure her into the bonfire area before engaging her if caught unprepared.