Hollowed villagers wandering aimlessly on the road that leads to the cathedral. They carry large and sharpened tree branches which they use as tools for hunting and crucifying the many Lycanthropes that lurk within the marshlands surrounding one part of the settlement's borders.

While they don't have a considerable amount of health and can be staggered easily, they can, in return, inflict a surprising amount of damage, either by stabbing at the player, charging at them from long distances, or by impaling their weapons on the ground with great force.

They are usually encountered in large groups and it is not rare suddenly finding oneself surrounded by many of these foes, as other hunters in the vicinity will frequently join in to an ongoing battle.

Some hunters can initially be encountered in a passive state, either it is hidden (or lost) amongst the woods' dense foliage or even immersed in their own endeavors, and will not attack unless one passes nearby.

Found in the Road of Sacrifices. Lycanthrope Hunters heavily populate the Crucifixion Woods all along the left shore of the marsh that leads from the Halfway Fortress toward the keep's ruins.

While their decayed appearance may initially imply otherwise, Lycanthrope Hunters should not be taken lightly, as they can deal a surprising amount of damage and will most likely attack in groups. They have a very long aggro range and may commence their charges from very far away and keep rushing toward the player for a considerable distance. Additionally, the weight of the large branches they carry allow them to drain large amounts of stamina with each hit, potentially being able to break the player's guard easily if their attacks are blocked.

Hunters are susceptible to fire and will become heavily staggered whilst being engulfed in flames for a few seconds when attacked with a Fire-based weapon.

The first groups of hunters encountered can be found traversing from the marsh toward the keep's ruins. It is advisable to draw-in those who fall behind with ranged attacks to dwindle their numbers.

They are susceptible to Alluring Skulls and Rapport, which can be used if the player suddenly finds themself in a precarious situation. 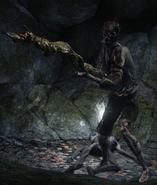