"My name is Lucatiel. I beg of you, remember my name. For I may not myself..."
— Lucatiel of Mirrah

Lucatiel of Mirrah is a character in Dark Souls II.

Lucatiel can be found for the first time in any of the following locations and she will deliver different dialogue depending on the number of times she has previously been met:

After meeting her in all of the aforementioned locations, she will appear for the last time at the first bonfire in Aldia's Keep.

Lucatiel has a rather androgynous appearance, with long, blonde hair wrapped in a ponytail, but her most distinctive feature is the metal bearded mask she uses to cover her face. Lucatiel will temporarily remove the mask after the player has gone through her entire dialogue when meeting her for the second time. This will reveal that although she is in human form, half her face has Hollowed, showing that she's cursed.

Lucatiel is somewhat of a loner and usually prefers to stay away from people. However, she shows great respect and admiration to those who are brave enough to speak to her and she is always willing to offer her assistance to those in need.

Although Lucatiel mostly remains calm and collected, she becomes incredibly distressed with the idea of going hollow and losing all of her memories. At one point, she even claims that she would be willing to kill the player if that means that she will be able to get rid of the curse. However, in the end, Lucatiel comes to terms with herself and accepts that she will eventually go hollow.

Lucatiel was born into a family of peasants in Mirrah, an unprivileged part of the society of this kingdom. In order to ensure the well-being of her family, Lucatiel and her brother joined the army. At an early age, she and her brother took up fencing together and, eventually, Lucatiel's skills on the battlefield allowed her to become a knightess of the Order.[1]

Although Lucatiel was a skilled combatant, she was no match for her brother. She claims that her brother was a far better swordsman than she was, as she was never able to defeat him. At some point in her life, her brother disappeared without a trace. Lucatiel thought that her brother might have fallen victim to the undead curse.

After she contracted the curse of undeath, Lucatiel went to Drangleic as it was rumored that the cure could be found in this land. With time, she became certain that her brother must have come here too. Lucatiel later confides that she feels the curse is taking over her, and that her memories begin to fade away, starting with the oldest.

When Lucatiel is found for the first time, she will introduce herself and explain her motives for being in Drangleic. She will also offer her assistance to the player during their journey.

During her second encounter, Lucatiel will tell the player about her past in Mirrah. She will then take off her mask, revealing her half hollowed appearance, and give the player a Human Effigy.

The third time she is met, she tells the player about her fears of losing her memories and of her brother. Lucatiel will explain how he is a better swordsman than her and she confesses that her brother, who is another victim of the curse of undeath, might be in Drangleic. She then gifts the Ring of Steel Protection +1.

The fourth time that the player finds Lucatiel, she is very confused and distressed over the curse, and says she would do anything to get rid of it, even if it meant killing the player. After exhausting her dialogue, she will be available as phantom for another boss fight and will move to the next area.

Lastly, Lucatiel can be found in a shack at the first bonfire of Aldia's Keep. She will be distressed if the player has not summoned and kept her alive for three boss fights, and begs the player to remember her name, as she may not. Lucatiel will disappear from the game after this encounter. If the player has summoned Lucatiel and kept her alive for three of the four summonable boss fights in the base game, she will thank the player for keeping her sane, and bequeath her armor and sword to the player. This is necessary for unlocking her achievement/trophy.

After meeting her in Aldia's Keep, she will disappear from the game, and her final fate remains unknown, leaving it up to the player's own interpretation.

A invader named Aslatiel of Mirrah later appears just before entering Aldia's Keep itself. He wears the same armor and weapon set as Lucatiel, which suggests that her brother indeed went hollow exploring Drangleic.

As of Patch 1.04, Lucatiel received an immense buff to her defense, making her capable of withstanding most of hits thrown at her.

In the Black Gulch she has now complete immunity to Fire damage.

Her AI remained the same though, which means she could still get stuck in the environment on her way to the boss or fall to her death accidentally.

Lucatiel can be summoned at the following locations:

Her summon sign is located at the bottom of the elevator of Sinners' Rise. Sellsword Luet can be summoned for this fight as well. (SotFS)

Her summon sign is found in front of the fog gate of this boss.

Her summon sign is located by the Hidden Chamber bonfire. Bashful Ray (SotFS) and Lone Hunter Schmidt can be summoned for this battle as well.

Her summon sign will appear in the Grand Cathedral near the iron chest only after she is talked to at Aldia's Keep. Twiggy Shei can be summoned for this battle as well.

"This land is not my birthplace. A distant land in the east, I crossed over the mountains from Mirrah." 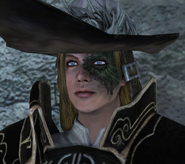 Inherit equipment from Lucatiel of Mirrah