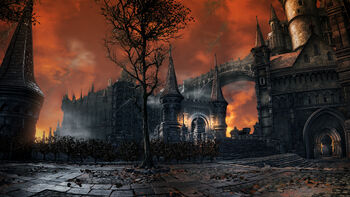 Lothric Castle is a location in Dark Souls III.

Overlooking the High Wall of Lothric, the castle is accessed upon placing the Basin of Vows upon the pedestal behind Emma, High Priestess of Lothric Castle. The Basin is obtained upon the death of Emma, either after the defeat of the first three Lords of Cinder or by the player's hand at any point. However, the pedestal does not become accessible until the Dancer of the Boreal Valley is defeated.

The first part of Lothric Castle consists of the fortifications and chambers leading up to the Grand Archives. It is guarded by a large number of soldiers, many laying in ambush and some located in strategic high places to hit the player with Undead Hunter Charms or Firebombs.

The main gate of the castle, near the Dragon Barracks, is guarded by two Lothric Wyverns that blanket the outer courtyard in fire if anyone tries to cross. Dropping down from the bridge and going left lets you cross the outer courtyard and avoid their fire breath. In the chambers on the left side there is an Outrider Knight, and on the right side you can reach the lever that controls the main gate and find an opportunity to kill the wyverns by destroying the Pus of Man that infest them.

Inside the gate are powerful Lothric Knights supported by Lothric Priests that will buff and heal them. Following the stairs out of this hall leads to the inner courtyard, where the gate to the Grand Archives is located, guarded by the Dragonslayer Armour. On the left of the inner courtyard is a ladder leading up to a rooftop, covered by crossbowmen, from where you can double back inside to find the Warrior of Sunlight covenant. To the right of the courtyard is a chapel where Eygon of Carim can be summoned, if his requirements are met, as well as an elevator that can be reached from the other side in the Grand Archives.

Retrieved from "https://darksouls.fandom.com/wiki/Lothric_Castle?oldid=318240"
Community content is available under CC-BY-SA unless otherwise noted.