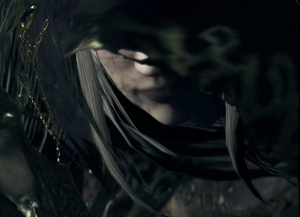 Lothric, Younger Prince is a character in Dark Souls III. He is voiced by Harry Lister Smith, who also voiced Dark Sun Gwyndolin in Dark Souls.

The Lothric bloodline was obsessed with creating a worthy heir, and when this proved impossible, resorted to unspeakable means. Suffice it to say, the path to linking the fire is a cursed one indeed.

Lothric is a pale, emaciated young man. He has long, claw-like fingers, light-colored hair that falls to his shoulders, and dark, sunken eyes. The way he clings to Lorian's back during battle suggests he is unable to walk, perhaps being too weak or deformed to do so. He is said to have only ever worn one robe throughout his life. Lothric relies on magic alone during battle, and is a considerably powerful magic user, casting homing soul masses, soul spears, and teleporting his brother around the arena. He is one of the few humanoid magic users in the series to cast spells without any apparent catalyst.

Lothric is thought to be the son of King Oceiros and the younger brother of Lorian, as well as the older brother of Ocelotte. From birth, he was destined to be a great warrior and a Lord of Cinder. He was beloved by the royal family despite being born a frail and shriveled child.

His older brother, Lorian, decided to share the burden of Lothric's curse and was rendered mute and mostly unable to stand as a result. The curse linked their souls irreversibly, perpetuated by the grief they shared for their fate, and can be seen in the fact that if Lothric dies, so does Lorian. The reason for their being cursed is never specified, nor are the atrocities committed in order to produce such an heir.

Lothric's refusal to link the fire is what sets the events of Dark Souls III in motion, with the past Lords of Cinder risen, and then the Unkindled when the Lords refuse to take their thrones. This makes Lothric the only Lord of Cinder to not have previously linked the fire. Lothric comments that he has no interest in taking up the mantle of Lord, and wishes to let the fire fade. According to the Soul Stream sorcery, "The first of the Scholars doubted the linking of the fire, and was alleged to be a private mentor to the Royal Prince." It is unknown who the first Scholar was, but they may have been the one to convince Lothric to reject his fate.

At one point, Lothric was expected to wield a platinum straight sword and become a champion, but possibly due to his frail health, this became a distant dream forever. 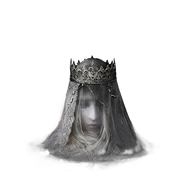 Lothric climbs onto Lorian's back after resurrecting him.

Lothric prepares to resurrect Lorian.
Add a photo to this gallery
Retrieved from "https://darksouls.fandom.com/wiki/Lothric,_Younger_Prince?oldid=326735"
Community content is available under CC-BY-SA unless otherwise noted.