Edit
This article is about the characters appearing throughout the Dark Souls series. For the gameplay mechanic in Dark Souls III, see Host of Embers.
See also: Gwyn, Lord of Cinder

The Lords of Cinder are characters who have linked the First Flame throughout the Dark Souls series.

The Lords of Cinder are heroes who have linked the First Flame and prolonged the Age of Fire, rather than become Dark Lords. Though it is important to note that not all Lords of Cinder do such out of free will, like in Aldrich’s case.

† This is dependent on the player’s actions. If the player kills the Sunlight Maggot, and then summons Solaire to face Gwyn, he will Link the Fire in his own world.[1]
* Depending on the player's chosen endings, the Chosen Undead, Bearer of the Curse and Ashen One could all become Lords of Cinder.
** The Soul of Cinder is a deific manifestation of the previous Lords of Cinder.

Gwyn, the first Lord of Cinder 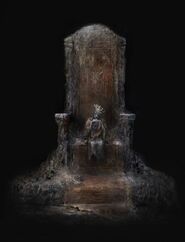 Aldrich, Saint of the Deep