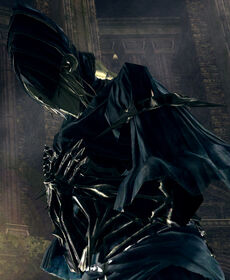 "...You, is that not... The soul of the man who fell on this spot, he was a dear friend. I wish to pay proper respect, with that Soul. Would you be willing to part with it?."
— Lord's Blade Ciaran

Lord's Blade Ciaran is a character in Dark Souls. She is exclusive to the Artorias of the Abyss DLC. She is voiced by Hannah John-Kamen, who also voices Sweet Shalquoir in Dark Souls II.

Found in the coliseum of Oolacile Township after defeating Knight Artorias.

She is the only female among the Four Knights of Gwyn and owner of the Hornet Ring; she wore it while using her dagger to lay waste to her foes.[1]

Ciaran utilizes Throwing Knives and Lloyd's Talismans. Her attacks can be quite damaging given their speed and Toxic/Bleed buildup, and she has much more health than the average NPC.

Ciaran mourning at Artorias' grave in the coliseum

Ciaran without her mask
Add a photo to this gallery

Retrieved from "https://darksouls.fandom.com/wiki/Lord%27s_Blade_Ciaran?oldid=335999"
Community content is available under CC-BY-SA unless otherwise noted.