The fight against the Looking Glass Knight takes place near the top of Drangleic Castle during a lightning storm. This boss will use physical attacks against the player as well as using its sword as a sort of "lightning rod". Its shield deflects magic, causing blocked spells to fly off in a random direction.

The knight's shield is in the shape of a mirror and when it plants it into the ground, it will summon a hostile NPC or another player to the fight (like the Old Monk in Demon's Souls). Notably, it will also stab its sword into the ground if it is summoning a player. It can summon a maximum of two phantoms and will continue to summon replacements throughout the fight if one of them is defeated.

While fighting this boss offline, he will summon a randomly generated enemy AI instead of human players. While the Looking Glass Knight is summoning, the players can take advantage of the situation to attack him until he staggers, thus cancelling the process of summoning. NPC phantoms will not use their shields.

The Knight served as Vendrick's foreboding lieutenant, wielding a Thorned Greatsword and a mirrored shield that had the ability to tap into other worlds.[1] Before the King's fall and the collapse of his kingdom, the knight would serve as a test to warriors who wished to serve under the king.[2] After Vendrick went into hiding in the Undead Crypt, the knight from then on served as the first line of defense against those attempting to pursue the now hollowed king.[3][4] It continues to challenge individuals who cross its path.

Benhart of Jugo and Ashen Knight Boyd can be summoned for this boss.

Leap: Leaps into the air in the player's direction. He will always use this as his first attack after the player passes through the fog door. Counter-intuitively, the best way to dodge it is to run straight forward and roll beneath him.

Charge: Charges forward and proceeds to lunge at the player. Only used when the player has retained some distance. Like most charging attacks, it does not track well and can be dodged easily.

Summon: Places the shield on the ground and proceeds to summon an NPC, if online and summoning a player the knight will plant his sword in the ground. This move takes several seconds to complete and is possible to stagger him out of it with a high poise-damaging weapon. He takes reduced damage while in this phase.

Lightning Blade: Uses the lightning to electrify his sword and makes a horizontal swing in the player's direction. The sword is only imbued for that one attack. It can strike some distance around his back as well as directly in front of him.

Balls of Lightning: Uses the lightning to electrify his sword and makes a horizontal swipe that shoots out five electricity balls. They spread out as they proceed and can be stepped through. They do not fan out for very long; being a fair distance away will avoid them completely.

Lightning Trail: Uses the lightning to electrify his sword and performs an overhead attack that sends a lightning trail that follows the player. Can be dodged by rolling to either side. 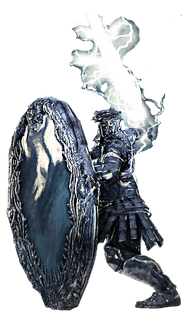 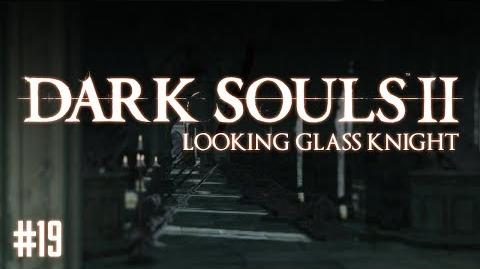 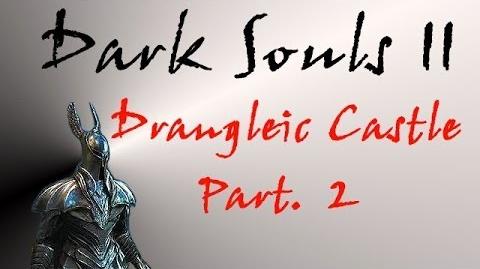 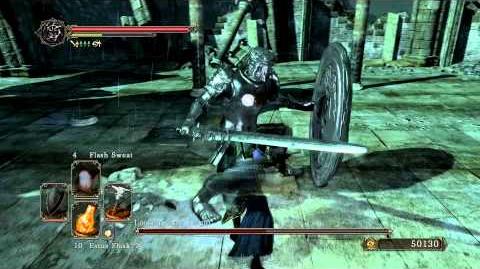 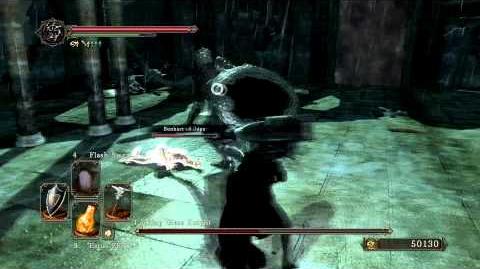 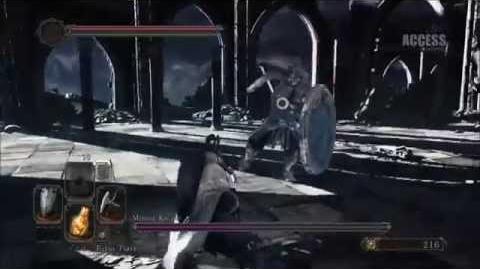 Dark Souls 2 Looking Glass Knight - Before and After (Demo Vs. Retail Graphics Comparison)
Add a photo to this gallery

Retrieved from "https://darksouls.fandom.com/wiki/Looking_Glass_Knight?oldid=319326"
Community content is available under CC-BY-SA unless otherwise noted.