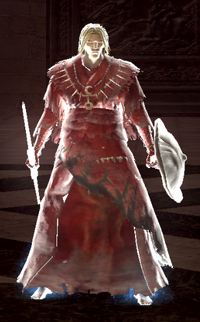 Lautrec's Sorcerer Comrade is an enemy in Dark Souls.

The sorcerer of Lautrec's party, along with a warrior, is encountered as a white phantom in Anor Londo if the Chosen Undead uses the Black Eye Orb to invade Knight Lautrec, the guilty for slaying Anastacia of Astora. The Black Eye Orb must be used in the main entrance of the cathedral that is adjacent to the area where Ornstein and Smough are fought.

The sorcerer will primarily use the Heavy Soul Arrow and Great Heavy Soul Arrow sorceries, and will occasionally switch to his empty fist to strike the player. He may cure himself of negative status effects with the sorcery, Remedy.

Lautrec's sorcerer comrade is likely one of the three known sealers that flooded New Londo to contain the Four Kings and their followers, the Darkwraiths.[1] The sealers were once healers, symbolized by their crimson attire.[2] Ingward is the only remaining sealer that watches over New Londo Ruins. The other, Yulva, seems to have abandoned her duty to take her healing arts back to Blighttown.[3]