"Oh, hello. I'm considering a change of location... I have a rather, pressing matter to attend to up above. That Keeper has served me well, but...enough with her... Keh heh heh heh..."
— Knight Lautrec of Carim

Knight Lautrec of Carim, also known as Lautrec the Embraced or Lautrec the Guilty when invading, is a character in Dark Souls. He is voiced by either Daniel Roberts or Will Vanderpuye.

Lautrec is found imprisoned on the top floor of the church in Undead Parish, before climbing the ladders to the roof where the Bell Gargoyles are fought. The Mystery Key that opens his cell (which can also be opened with the Master Key) is found in the cellar-like area next to the Fang Boar guarding the gates to the inner parish.

After being freed, or escaping after the Gargoyles are defeated if he wasn't freed by the player, Lautrec is found sitting in Firelink Shrine across from the imprisoned Fire Keeper, Anastacia of Astora. If Lautrec was freed, then it is here that he will reward the player with a Sunlight Medal.

If the player frees Lautrec and receives his reward at Firelink Shrine, he can be summoned to assist against the Bell Gargoyles and the Gaping Dragon. His first summon sign is near the ladder before the Fog Door; the second summon is opposite from Solaire's, hidden behind a pillar near the Gaping Dragon's fog door.

Whether or not Lautrec was freed, after the player rings the second Bell of Awakening or picks up the Fire Keeper Soul in Blighttown, Lautrec will kill Anastacia and begin a quest line in which the player can collect a Black Eye Orb along with Anastacia's robes, and hunt Lautrec down to retrieve the Fire Keeper's Soul in Anor Londo.

Lautrec dual-wields Shotels, allowing him to partially hit through block. Therefore, dodging his attacks or killing him as quickly as possible will work best. He also wears a Red Tearstone Ring, so be extra careful when he is near-death. Additionally, he may use a parrying dagger to parry and riposte players.

If fought at Firelink Shrine, Lautrec can safely be kicked off the ledge. Quit and load the game, and his items should be right in front of the player.

If fought in Anor Londo, Lautrec will have a sorcerer and a Pike-wielding warrior guarding him. The player is only required to kill Lautrec, so they may choose to concentrate on him and hope to kill him before his companions cause any trouble. An easy way to do this is to go up the staircases to the left or right, then aggro Lautrec with a bow. Lautrec is faster than the rest of his party and will run up the stairs first, which then allows the player to engage him alone atop the chokepoint.

Poison Arrows can prove effective on both Lautrec and his companions. In addition, firing them from where the player spawns in his world will not make them aggro. This lets the player kill without retaliation.

A very easy way to defeat him consists of wearing both the Ring of Fog and the Slumbering Dragoncrest Ring. The player must then approach him and his companions by walking along either of the hall's walls until they reach the area behind him, then they may approach him from behind and backstab him. If the player's weapon is strong enough, a single backstab will suffice. Even if he survives, his two comrades will not react as they are slightly in front of him, allowing the player to finish the job. Once behind Lautrec, the Ring of Fog can be switched for the Hornet Ring to increase the damage. One can also use Hush to remove the need of the Slumbering Dragoncrest Ring, although they must be careful not to move after the effect expires.

Lautrec's armor reveals that he was an adherent of the goddess Fina. The armor description states that Lautrec, during a period of solitude, "forsook everything" because he believed in Fina's love for him. This could either mean that Lautrec was delusional, or that the goddess emotionally manipulated him, as it is mentioned in Ring of Favor and Protection that Fina has a “fateful beauty”.

Lautrec's goals were never explained in the game. He mentions that he is on a "mission", yet it is never elaborated upon. He interacted with, and was possibly tricked by Patches at least once prior to meeting the player, and he knows of Petrus and his background. It could be that Anastacia was killed for her Fire Keeper Soul, but it is found on his person after defeating him, meaning he either had neglected to use it or kept it as a trophy.

Lautrec flanked by his comrades in Anor Londo 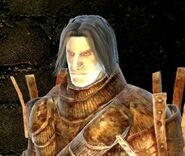 Lautrec without his helm