"Thou shalt see further on, an Abyss was begat of the ancient beast, and threatens to swallow the whole of Oolacile. Knight Artorias came to stop this, but such a hero has nary a murmur of Dark. Without doubt he will be swallowed by the Abyss, overcome by its utter blackness... Indeed, the Abyss may be unstoppable..."
— Elizabeth

Knight Artorias, also known as Artorias the Abysswalker, is a boss in Dark Souls. He is exclusive to the Artorias of the Abyss DLC.

Knight Artorias is located in the coliseum area of Oolacile Township, at the end of the Royal Wood.

By the time the Chosen Undead encounters him, Artorias is shown to have already been corrupted by the Abyss with his armor looking putrefied, oozing an aura of darkness. His crippled arm is likely the result of Artorias halting the spread from devouring his wolf companion by means of a now missing shield. He possesses a greatsword that has also been consumed, yet is still far from ineffective. Having lost his sanity, the knight moves about in an untamed, beastly manner as he howls beneath the blue shroud of his helm.

Sir Artorias the Abysswalker was one of the Four Knights of Lord Gwyn.[1] He only makes an appearance in the past, as he is deceased by the time the Chosen Undead escapes the Undead Asylum.

Knight Artorias wore distinctive armor, as well as the Wolf Ring, and brandished his Greatsword and Greatshield. He is known to have been a friend to Alvina of the Forest Hunter covenant. Sif, the Great Grey Wolf was his companion, now guarding his grave and keeping the Covenant of Artorias ring in his possession.

Artorias hunted the Darkwraiths[2] and was able to traverse the Abyss with the power of his ring, which he obtained after making a covenant with the beasts there,[3] preventing him from being swallowed by the void, but cursing his sword in the process.[4] In recognition of his actions, he was awarded one of Anor Londo's treasures - a Silver Pendant that allowed him to repel Dark sorceries.[5]

When Oolacile became threatened by the Abyss created by Manus, Artorias and his wolf companion Sif arrived there in an attempt to save Oolacile and rescue the abducted Princess Dusk.[6] However, the two were overwhelmed, and Artorias sacrificed himself to protect Sif using his Cleansing Greatshield, erecting a barrier around the young wolf.[7] Swallowed by the Dark, he became corrupted along with his already-cursed sword.[8] He was then laid to rest by the Chosen Undead after their encounter in the coliseum of Oolacile.

Once defeated, Hawkeye Gough mentions the player defeating Artorias, and speaks of him when talked to multiple times.[9]

His legacy as a hero lasted for centuries. By the time of Lothric, there was the Undead Legion of Farron, who were commonly called the Abyss Watchers. They partook of wolf blood,[10] and it is said that their souls are bound together and are one with the soul of the "wolf blood master",[11] who is Artorias.[12] Wielding greatswords modeled after his, and fighting in wild ferocious styles, the Legion fought a veritable war with the dark of the Abyss that their master had fought ages past.

While this boss is rather difficult to predict, he does have a few signs for his attacks, and well-timed rolls prove useful here. Being able to fast-roll is highly advised but not necessary. The player can place themself away from him by about twice his reach at all times, even for melee.

See below for attack name references

When he uses his Somersault Slam attack, the player will want to roll to the right as the camera tilts upward while locked onto him. The player can do this three times and then get in one or two attacks (based on one's weapon) after the third attack lands. Avoid attacking after his Steadfast Leap. Instead use that opportunity to heal or get some distance from him.

When he uses his Overhand Smash, roll to the right. While he leaves himself open for a few frames, he will usually follow up with his Spinning Slash attack. Therefore, it is best to get some distance from him instead as the Spinning Slash attack is difficult to get away from when it begins.

With his Charging Slash move the player will always want to roll backwards from where he intends to land the attack. After successfully dodging this attack, the player will be able to get one or two hits on him.

His Heavy Thrust attack will need to be side dodged. Depending on which way he turns during the charge, the player will need to dodge the opposite way. After the dodge, he has a long recovery time and the player should be able to get two or three hits in.

When the player is behind Artorias, he may use his Abyss Sludge attack. This move does little damage but can stun and even knock down players with little to no poise. If timed right, the player can roll forward through the attack and get a hit on him, then immediately retreat.

After Artorias has lost 1/3 of his health, he will start to use his Wrath of the Abyss power up. If left alone, he will do much more damage after he completes the power up for a limited time, potentially one-shotting the player. If the player can get close fast enough, they can stun him out of his power up before it's completed by hitting him repeatedly. If the player doesn't do enough damage fast enough, he will hit them with an area of effect blast attack that will knock the player on their back. The best bet is to use a heavy, high damage weapon and stop him from gaining his attack buff. Another, safer way is to equip a bow in the off-hand and shoot him repeatedly while he is charging up. Yet another way is to equip Throwing Knives and use those in quick succession to stagger him.

Artorias crouches, then leaps high into the air towards the player, causing damage in a small area of effect around him. Rolling or moving towards him instead of away can increase one's chance of successfully dodging before he lands.

Artorias somersaults into the air after which he slams his sword down vertically. He can repeat this up to three times. Roll to the side to avoid it. The player can be stun-locked in this combo.

Slams his sword overhead and towards the ground; high staggering power that leaves his guard open for a short time after it lands.

Artorias moves toward the player while swinging his sword 360 degrees. He presents an opportunity to be attacked after the player dodges his swing.

Pauses before performing a heavy, medium range thrust towards the player. If it connects, it can hit twice, dealing heavy damage and knocking the player to the ground.

Artorias quickly spins, completing a full revolution. It has the potential to connect twice.

Artorias throws a staggering sludge in a wide arc, a few feet in front of him. Usually performed if positioned behind him.

Wrath of the Abyss

Activates in intervals after approximately 20% of his total health is reduced. After rolling away, he will slowly build up dark magic energy, presenting ample time for retaliation, potentially staggering him, or to apply augmentations to one's weapon or self. A single Sunlight Spear can stagger him and prevent this build up from finalizing. If the player does not stagger him, he will release an explosion that does magic damage in a mid-ranged area of effect all around him. Artorias' attack speed, area of effect and damage are enhanced for a limited time afterwards. These effects can stack.

In addition to the health thresholds, this attack has a time interval between uses, in that if Artorias is left undamaged for a period of time, he will re-activate Wrath of the Abyss. 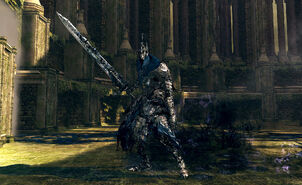 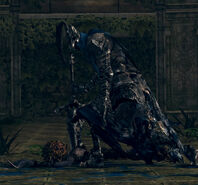 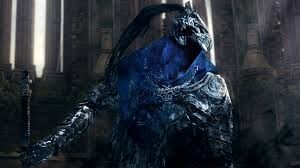 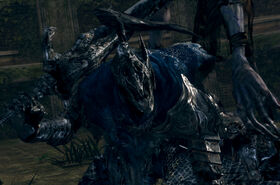 About to throw the Bloathead 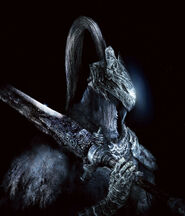 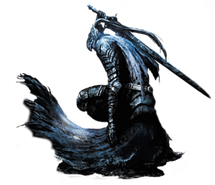 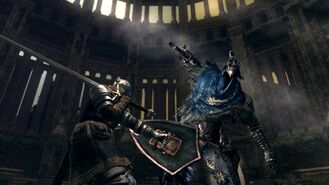 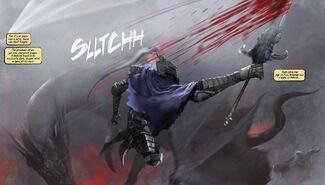 Artorias slaying a Dragon in Dark Souls: The Age of Fire. 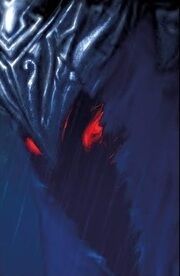