Kirk, Knight of Thorns, also known as Knight Kirk, is an enemy in Dark Souls.

Kirk is an invader that can assault the player three times in a playthrough:

As with other dark spirits, Kirk will not invade in the respective areas if the boss of the area has been defeated, or if the player is Hollow.

Kirk invades the player in the aforementioned places. He has no dialogue whatsoever and does not contribute to the story at all, probably being present only to give the players a taste of PvP experience.

Due to a context error, he is often mistaken for being a member of the Darkwraith covenant when in reality the original text merely refers to him being a "dark-wraith" as in "dark (black) phantom".

Miyazaki has stated that Kirk is actually a Chaos Servant, and is invading other worlds in order to gather Humanity so that he may offer them to Quelaag's Sister.[1]

Kirk is a standard melee fighter. When he rolls his armor deals minimal damage on contact, but will stun low-Poise players, so keeping a shield up makes fighting him considerably easier.

Kirk's damage output is unremarkable, making him good practice for parrying. However, his weapons do cause the Bleed effect. He also attacks fairly slowly, giving many opportunities for backstabs.

Kirk invades at very inconvenient places: in the first and third instances, he is likely to invade while the player already has their hands full fighting other enemies, and in the second, he fights on the edge of a ledge, making it likely for the player to accidentally fall off.

The Set of Thorns spawns in the Daughter of Chaos area in Quelaag's Domain if Kirk has been defeated all three times; however, his sword and shield are not definite drops and may never be dropped for the player.

The locations at which Kirk invades are not a set order, it is contingent on which order player has chosen to visit while being in a non-hollowed state. 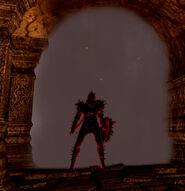 Kirk invading in the Demon Ruins. 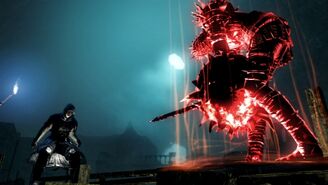