"The King's Decree is no trifling matter. I, Judicator Argo, shall deliver thee justice."
— Argo

Judicator Argo is an enemy character in Dark Souls III: The Ringed City.

He is voiced by Pete Gallagher.

Argo is a Judicator Giant and the master of the Spears of the Church covenant. He will speak to the player as they approach the doors of the Church of Filianore and warn them not to enter. Upon entering, he will admonish them for their intrusion and summon a Painting Guardian to attack them. After a few minutes, he will either summon Halflight, Spear of the Church or a player who is a member of the covenant before vanishing. He can be killed before the boss fight officially begins, although there are no rewards or benefits from doing so.

If the player has defeated Darkeater Midir, then they can choose to join the Spears of the Church covenant and be summoned by Argo into the boss fight. However, the other player will still be required to make him hostile and defeat his champion in order to progress.

If the player has defeated Argo and his champion, then they can resurrect him for a number of souls at the Purging Monument. This will allow them to rejoin the covenant and continue to level up its ranks, although reentering the church will make him hostile again.

Found inside the Church of Filianore after encountering Darkeater Midir on the bridge.

Tasked by Lord Gwyn to protect Princess Filianore and ensure she does not awake from her slumber, his loyalty to the gods is absolute and will not tolerate trespassers. 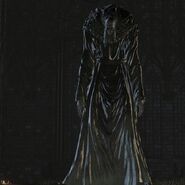 Argo summoning his disciples
Add a photo to this gallery

Retrieved from "https://darksouls.fandom.com/wiki/Judicator_Argo?oldid=291818"
Community content is available under CC-BY-SA unless otherwise noted.