The Ironclad Soldiers were minions created by the Old Iron King, their life granted by an enchantment of souls. By now this is again an iron husk, and fit to wear.[1]

The Ironclad Soldiers were created by the Old Iron King and brought to life by an "enchantment of souls",[1] making these soldiers comparable to the golems of Vendrick and the Ivory King.

At some point, warriors wearing decrepit armor emerged from Drangleic Castle, and quietly assumed positions amongst the royal army.[2] This implies that Vendrick was able to obtain the means to control or create these mighty warriors. They never spoke a word nor showed their faces,[2] likely due to their souls being embedded into the armor itself, rather than a creature within.

They are almost exactly as the Old Ironclad Soldiers, their differences being their shinier armor, larger health pool, and higher stats.

Ironclad Soldiers are slow moving, but hit quite hard. One strategy is to circle around it and dodge its slam attack, which it does when you are behind it, and then attack as it stands up. It is also easy to use hit-and-run tactics by baiting it into doing its overhead swing, moving just out of range and then attacking as it recovers.

Evading is more effective than blocking due to its attacks eating up a lot of stamina.

They appear to be susceptible to ranged attacks. Retain a safe distance while casting/shooting and watch for its charge attack, which can quickly close that distance.

As with the Old Ironclad Soldier, they're weak to Lightning.

Swing: Performs a broad swing with the mace.

Mace Combo: Performs a 4 swing combo. The fourth swing is done with a delay after the 3 swings have been performed.

Body Slam: When the player is ever behind this foe, it will perform a body slam with their backs. Unblockable. 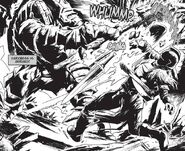 An Ironclad Soldier in Dark Souls II: Into the Light.
Add a photo to this gallery

Retrieved from "https://darksouls.fandom.com/wiki/Ironclad_Soldier?oldid=327612"
Community content is available under CC-BY-SA unless otherwise noted.