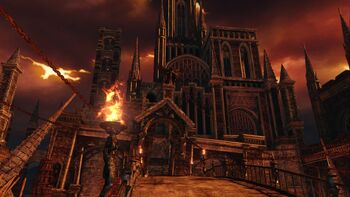 The Iron Keep is a location in Dark Souls II.

The Iron Keep is a vast fortress surrounded, and slowly sinking into, an immense mass of molten iron.

In the center lies a large foundry filled with falling platforms, along with one that can be submerged into the iron to kill enemies.

Items are strewn about on various platforms floating on the iron surrounding the keep; reaching them will require high stamina, good timing, and excellent fire defense.

A Pharros' Lockstone is required to access the Belfry Sol and its corresponding bonfire.

The Iron Keep was once home to the mighty Alonne kingdom, ruled by a king obsessed with making an unbreakable empire. He had a son, the prince, who had a wife, the princess, and another secret true love. The princess grew jealous and eventually turned herself into Mytha, the Baneful Queen in pursuit of ultimate beauty. She was banished to the Harvest Valley and the kingdom slowly began to succumb to fire "that rose from the earth".

Retrieved from "https://darksouls.fandom.com/wiki/Iron_Keep?oldid=328910"
Community content is available under CC-BY-SA unless otherwise noted.