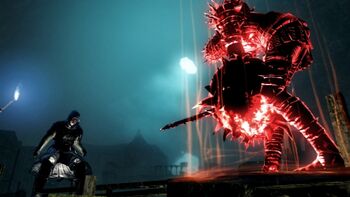 Invading is a form of PvE and PvP in Dark Souls.

When playing the game, the player may be invaded if certain parameters are met. While invaded by characters or other players, Fog Doors appear in the general area and it becomes impossible to exit the game through the in-game menu.

Invaders are still mortal to environmental hazards and it is possible to bait a Player Invader towards the Hellkite Bridge and have the Drake incinerate the Invader with its initial fly-by attack. Also, Invaders are not immune to the lava in Lost Izalith or the poison swamps in Blighttown and players can lure Invaders into these hazards to kill them slowly.

If using an Eye Orb to invade, the player may use the eye orb again to cancel their invasion. Once the process of invading another world is initiated, as signalled by the message "Invading another world," it cannot be cancelled with the exception of dying or exiting the game.

While exploring in human form, there are certain areas of the game that will trigger an invasion by a character Black Phantom, otherwise known as Red Phantoms. These Black Phantoms will drop some combination of souls, humanity, and items, if applicable. These encounters will not occur while in Hollowed form, and will no longer trigger once the area boss is killed. Some NPC Invaders have a non-phantom version of themselves somewhere in the game world.

If playing Online while exploring in non-hollow form, the world may be invaded by another player.

Kirk, Knight of Thorns: Invades near the exit from the Basilisks and may drop Barbed Straight Sword and/or Spiked Shield.

Maneater Mildred: In the Swamp, triggered by walking in the area near the bonfire. Drops the Butcher Knife.

Tomb of the Giants[]

Paladin Leeroy: After the last bonfire, and before Gravelord Nito. Triggered when walking into the cave area. Drops the hammer Grant and the shield Sanctus. The golden fog gates have to be down in order to trigger this spawn.

Kirk, Knight of Thorns: Invades on the ledge right before the Capra Demon congregation. May drop Barbed Straight Sword and/or Spiked Shield. Kirk does not invade here if the Lordvessel has not been placed yet.

Kirk, Knight of Thorns: Spawns next to the Fog Door leading to the Bed of Chaos. May drop Barbed Straight Sword and/or Spiked Shield.

Marvelous Chester: Spawns down the stairs near the first Bloathead Sorcerer (which is part of the Artorias of the Abyss DLC).