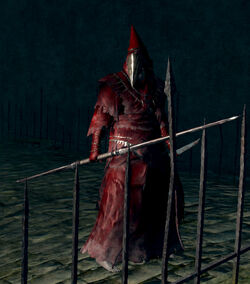 "Well, this is a surprise. I don't get many visitors, except for ghosts. Do you have some business here? My name is Ingward. I'm an old man, bound to these parts. But I don't mind a chat. I may even be of some help."
— Ingward

On a platform atop the ladder located in the fireplace-like nook in the New Londo Ruins.

He is later found tucked in a corner in Firelink Shrine near Griggs if he is spoken to after defeating the Four Kings.

Ingward awaits the one that has obtained the Lordvessel, granting them the Key to the Seal which is required to drain water from the lower ruins in order to enter the Abyss.

Ingward is mentioned to be one of the three sealers who entered the New Londo Ruins in order to flood the area and stop the Four Kings and the Darkwraiths. The other two tired of their duty and left the area, making Ingward the only remaining sealer. Not much more is known about the sealers other than the fact that they were also known for their healing powers, hence their crimson robes.

Can be easily killed before doing any damage as he is quite fragile.

Ingward can also remove Curse at the cost of one Humanity.

The following is content that is present within the code of Dark Souls, but not actually implemented in the game. Text was found from a text dump which can be found at: http://pastebin.com/hA42TwK8