Hydras are minibosses in Dark Souls.

A Hydra can be found at the bottom of Darkroot Basin and another is found close to the entrance to Ash Lake.

The Hydra is a large sea monster with a body similar to a plesiosaur, but with tentacles underneath a shell-like structure and several long necks and heads. Each head can fire blasts of water from a distance or lunge into the ground for a close range attack.

The Hydra can be defeated by severing its heads or by targeting the main body and using ranged attacks.

As the player moves closer to the shore, the Hydra will almost exclusively use its head strikes. After it lunges toward the player, each head will bury itself in the ground for a short time, presenting an opportunity to sever its vulnerable necks. As each head is defeated, the spread of the Hydra's attacks will diminish, making it easier for the player to finish the job.

The lunge attacks can be blocked or dodged. Certain spots can be found where the heads will completely miss the player. If the Hydra's position does not change, these spots can be exploited throughout the battle.

The Darkroot Basin Hydra rests in a deep pit beyond an otherwise shallow pond and hardly moves at all. By wearing the Rusted Iron Ring, mobility will not be an issue throughout the fight, although care should be taken not to walk too far into the lake, risking a sudden death by sinking into deep water, whether by human mistake, by being pulled in by one of the Hydra's heads while it is retracting, or by being launched in by the area of effect blast unleashed by the water projectiles.

Crystal Golems in the area can be damaged by the Hydra's water projectiles.

As the player approaches the Hydra at a distance from its front, the slightly elevated area on the left, from the player's perspective, is almost completely safe from the water projectiles; however, they are relatively easy to block. Although the player is relatively safe from health and stamina damage when blocking, the water projectiles can still deal substantial stamina damage through the shield. Alternatively, equipping the Ring of Fog will allow the player to approach the Hydra much closer. The monster will still start shooting projectiles, although at no specific direction until the player gets too near.

While using a hit and run method, players can utilize the rock and tree near the edge of the water as cover from the water projectiles and head strikes. After the Hydra thrusts its heads into the ground, hack at one of the necks until the head is severed. Each head will land in the same relative position after every attack. The heads that land closest to the player will normally be chopped off first, while the last head will be very hard to hit with melee attacks. Because the remaining head will always miss the player even when standing still, this head can be safely dispatched with ranged attacks. A few shots will quickly sever the head and defeat the Hydra. Alternatively, the last head can be reached with close range weapons if the Hydra's position is shifted by running along the water's edge, or if the player starts running towards its landing spot the moment the attack is initiated.

The Darkroot Basin Hydra can also be approached from the opposite direction, taking the reverse shortcut from Darkroot Garden via the Covenant of Artorias door. From this direction, the heads can be eliminated by shooting it with arrows, with the exception of one, drastically reducing the threat of its water projectiles.

The Ash Lake Hydra rests near the edge of a sandbar entering the lake. Some distance from the Hydra, a large log lies on top of a ridge of the sandbar. Sheltering behind this log will attract long range attacks from the Hydra, which will be blocked completely by the log. It is possible to shelter behind the log and attack the Hydra safely with a bow; the Hawk Ring and Dragonslayer Greatbow are recommended. When the Hydra is already at very low health, the Symbol of Avarice and Covetous Silver Serpent Ring can be equipped to increase the number of souls gained when the Hydra dies. Equipping the Symbol of Avarice will mean shooting blind, but the Hydra is so large that it is easy to continue hitting its body (it is not necessary or advisable to aim for the heads), for the last few shots required to kill it.

For melee based characters, one of the major dangers while confronting the Hydra is actually reaching a distance where it starts lunging, as that means having to evade or block the constant barrage of homing water shots. Wearing the Ring of Fog allows the player to approach the Hydra without issues, to the point that it will only become hostile once the player is right in front of it, having a melee based fight for the most part from the beginning. Unlike the Hydra fight in Darkroot Basin, the waters of the shore where this battle takes place is shallow, so the Rusted Iron Ring is not necessary for this fight. 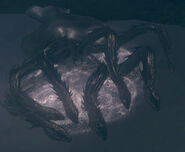