The Hornet Ring is a ring in Dark Souls. It was one of the four rings gifted to the Four Knights of Gwyn, along with the Leo Ring, the Hawk Ring, and the Wolf Ring.

One of the special rings granted to the four knights of Gwyn. The Hornet Ring belonged to the Lord's Blade Ciaran.

Found on a corpse behind the gravestone of Sir Artorias the Abysswalker, in the center of Great Grey Wolf Sif's arena. 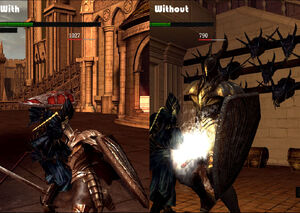 Example of the damage output as of patch 1.06 (damage will vary with each weapon). 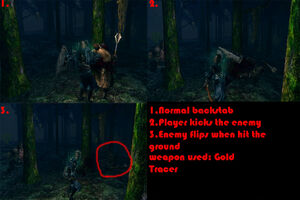 Backstab special animation with a curved sword.
Add a photo to this gallery
Retrieved from "https://darksouls.fandom.com/wiki/Hornet_Ring?oldid=319165"
Community content is available under CC-BY-SA unless otherwise noted.