The Hollowslayer Greatsword is a soul-transposed greatsword in Dark Souls III.

Greatsword used for a lifetime by a masked knight. Harbors the fears that lurk within the minds of Hollows, and is particularly effective against them.

Skill: Stance
While in stance, use normal attack to break a foe's guard from below, and strong attack to slash upwards with a forward lunge.

Obtained by transposing the Soul of the Rotted Greatwood with Ludleth of Courland for 1,000 souls.

A quality greatsword that leans towards Dexterity, the Hollowslayer Greatsword is renowned as a very strong Poise weapon that gives Dexterity builds an option for standing their ground against opponents.

The greatsword has a versatile moveset, giving its wielder the option for horizontal and vertical slashes, as well as powerful thrusts to extend its reach. But its greatest asset is that on its second and third weak attacks while two-handing, the Hollowslayer Greatsword gains almost instant Hyper Armor, allowing the wielder to plant their feet after the first attack and out-trade any foe who lacks a large enough weapon to break their Poise.

A unique quirk of this weapon is that it deals bonus damage to Hollow enemies (including some bosses). This can be particularly useful in single player against certain enemies, and can even be used against Slave Knight Gael from his second phase onward.

The data displayed above are current as of Patch App 1.15 Regulation 1.35. 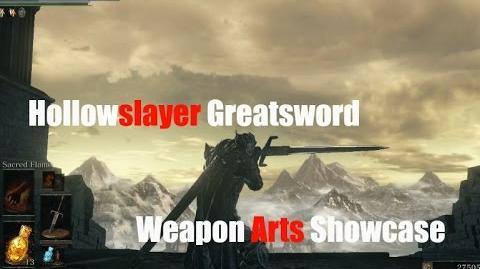