Edit
watch 01:48
What is Hollow?
Do you like this video?
Play Sound

Not to be confused with Hollow (enemy).

Hollow (亡者, Mōja, Hollow) is a degenerative state in the Dark Souls franchise which the Undead are doomed to eventually become unless they can find a steady supply of Humanity.

In terms of gameplay, Hollow refers to an in-game mechanism which limits the abilities and possible scenarios of the Chosen Undead. Namely, not being able to summon NPCs and other players in the form of white phantoms. Alternatively, being Hollow might also be desirable at times as it prevents the player from being invaded by other characters and players.

It is possible to "Reverse Hollowing" by offering Humanity at a bonfire; however, death results in reverting to a semi-Hollowed state. Also, the darksign can recreate the Chosen Undead's body in order to be reborn.

Hollowing in Dark Souls II is similar to the previous game, with a few key differences:

Reverse Hollowing can be made instantly using a Human Effigy from the inventory. Alternatively, seeking Vendrick's blessing and wearing one of the four crowns will completely negate the effect of Hollowing, even upon death.

Hollowing is a bit different in Dark Souls III compared to the previous games.

The exact process of turning Hollow is not entirely clear. Many Undead characters encountered in Lordran will eventually turn Hollow if certain prerequisites are met. Most characters are fearful of going Hollow and try to ward it off as much as possible, though the Crestfallen Warrior seems to find the prospect of going Hollow to be desirable.[1]

The Chosen Undead is already in a somewhat Hollowed state when escaping from the Undead Asylum and seems to be subject to a different progression pattern compared to other Undead characters in Lordran. Despite the Chosen Undead's appearance as a Hollow, he or she is able to maintain their free will and this is immediately recognized by other characters.[2]

In general, it seems that Undead go Hollow more quickly when they have no further goals or purpose. Even characters like Blacksmith Lenigrast, who are visibly almost fully Hollow, can maintain their lucidity if they are focused on their craft. This is likely why the Chosen Undead never fully hollows during the course of the game, since he/she will continue on their journey for as long as the player is motivated.

At some point in time, Hollows develop their own civilization, most notably Londor, governed by the Sable Church.

All Undead will one day lose their mind and go Hollow.[3][4] 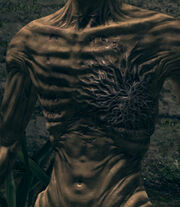 The symptoms of being Hollow is primarily characterized by a lack of free will. Those that are Hollow may still have attractions to things they valued as living and Undead.[5] This might explain why so many have maintained stations at various posts as well as their aggression towards non-Hollows.[6]

Hollows are also referenced as mad[7] or lost, also characterized by abhorrent stench.[8] Hollows' minds are filled with fears.[9] During the process of hollowing each death erases some parts of memory and at the end only madness persists.[4]

Beyond this, drastic changes in physical appearance can be observed. Skin appears slightly decomposed and the body thoroughly dehydrated, prominent veins can be seen surrounding the heart although physical signs may only be indicative of progression into a Hollowed state and not of being entirely Hollowed.[10]