Lord Wolnir of Carthus sentenced countless souls to gruesome deaths, keen to outlive them all.[1]

High Lord Wolnir is a colossal skeleton adorned with jewelry and a few shreds of clothing. Only his torso up remains of his body.

At the end of the Catacombs of Carthus, the player will come upon a grim chalice. Interacting with it will send the player to the Abyss to face Wolnir.

Once upon a time, each of the rightful lords of Carthus were bestowed crowns judiciously, until Wolnir brought them all to their knees,[2] and conquered most kingdoms known to their people.[3][4] Thus, the crowns of Carthus became one, and Wolnir the one High Lord.[2]

Wolnir eventually succumbed to the Abyss,[5] and in falling, was gripped by a fear of true darkness; so he pleaded to the gods for the first time.[6] He found some semblance of comfort from a holy sword and three armlets stripped from the corpses of clerics. [6] Wolnir sentenced countless souls to gruesome deaths, keen to outlive them all.[1]

The key to beating Wolnir is to destroy his bracelets, one on his right hand and two on his left. By breaking all three bracelets, Wolnir will descend into the Abyss and die. The boss is surrounded by a black fog which rapidly drains the player's health, making it hazardous to move past Wolnir's arms or body. Occasionally, Wolnir exhales a blast of this fog which covers a large area in front of him, which will likely kill any player who does not quickly get out of range. The fog deals high amounts of dark damage and no real amount of resistance will be particularly effective. Extremely high amounts of resistance against this effect can only buy about 3 seconds (confirmed) of life in the fog. But most attempts left the character with around 10% of their health remaining.

Destroying the bracelet on his right arm may prove more difficult for melee attacks, as it is more often in the fog. Using bows is a good alternative to destroy Wolnir's bracelets, especially the one on his right hand, as the player can remain at a considerably safe distance. The damage done to his health bar will be minimal. However, destroying the bracelets will only take a handful of successful hits.

Wolnir attacks mainly with fist swipes. These attacks are well-telegraphed and can even be blocked with a strong enough shield. After destroying one of the bracelets, he may summon his sword which greatly increases his attack range. It's possible to prevent this by destroying a bracelet whilst he is mid-summon. Occasionally, he will call forth Skeletons, Skeleton Wheels, and even Skeleton Swordsmen to aid him; although, they will often be destroyed by his attacks. The variety of this summoning appears to correspond to how many bracelets he has left.

Upon entering the Abyss, the Grave Warden Pyromancy Tome will be lying ahead to be picked up. If it is picked up, the boss fight will begin immediately. Instead of picking it up, the player can take this opportunity to attack and possibly destroy one of Wolnir's bracelets on his left arm. The tome can be retrieved at any time during or after the fight, or once the player has returned to the chalice room and has reloaded the area.

Although it is not immediately apparent, there is essentially a time limit to this battle. Wolnir constantly climbs up the incline and, even though he will be blocked by a wall, the area left to the player will be minimal, making dodging attacks much more difficult. Destroying a bracelet will cause him to slip back down the incline, giving the player more room. 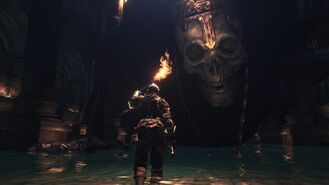 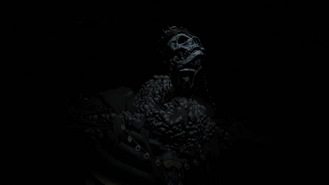 Wolnir trapped in the Abyss desperately searching for a sliver of light. 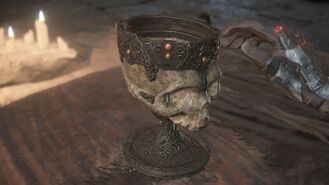 The chalice used to summon Wolnir. 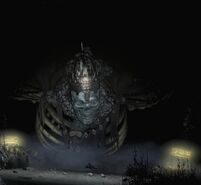 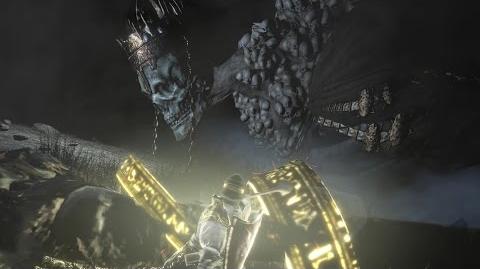 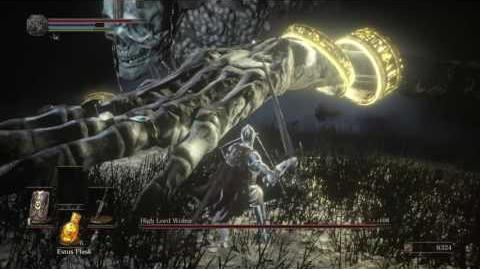