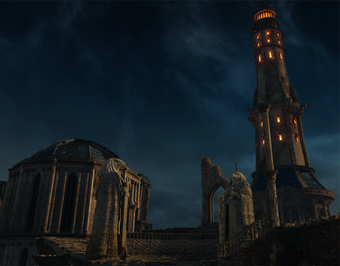 Heide's Tower of Flame is a location in Dark Souls II.

Heide's Tower of Flame is a semi-flooded and ruined area filled with towers and arches, reminiscent of designs in Anor Londo from Dark Souls. The area is populated exclusively by Old Knights.

There are three levers in this area, each revealed after defeating the nearby Old Knights: two can make the Dragonrider boss fight much easier by expanding the size of his arena, and the third lowers the drawbridge to the Cathedral of Blue and the Old Dragonslayer boss. The Old Knights will actively pursue fleeing players up to the Cathedral entrance.

No-Man's Wharf can be reached through a series of tunnels underneath the tower after defeating the Dragonrider.

Facing off an Old Knight
Polski
Community content is available under CC-BY-SA unless otherwise noted.
Advertisement